Geagea: We're Living Historic Moments and We'll Have '100% Made in Lebanon' President 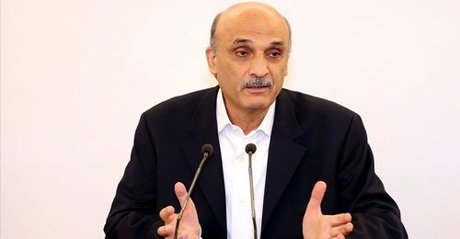 Lebanese Forces leader Samir Geagea announced Wednesday that the country is going through “historic moments” with the looming election of a “100 percent made in Lebanon” president.

“We are living historic moments, even if not everyone is satisfied,” said Geagea at a Maarab conference on oil and gas exploration in Lebanon.

“We managed to do a lot of things regarding the presidency. There was a veto on the presidential election and there was a very big decision to block it, and I'll leave it to your imagination to guess where it was coming from,” he added.

“Our conscience is clear and we have made a big achievement for the sake of the country,” Geagea boasted.

He also stressed that the Lebanese will soon have a “100 percent made in Lebanon” president.

“Some Lebanese refuse to believe that we have a national will. Some countries do not want elections in Lebanon but as soon as some political forces reached an agreement in Lebanon, they managed to reach a 100% 'made in Lebanon' presidential vote,” Geagea added.

The LF leader played a key role in supporting the presidential nomination of Free Patriotic Movement founder MP Michel Aoun after the two parties reached a political agreement after months of rapprochement talks.

Aoun was tipped to become president after his nomination was formally endorsed by al-Mustaqbal Movement leader ex-PM Saad Hariri on Thursday.

Geagea: We're Living Historic Moments and We'll Have '100% Made in Lebanon' President

Come on Geagea, don't be ridiculous.

i just made them 6, flamethrower.

by the Lord you mean Ayatollah?

So it's true that Lebanon has been bought out by Coca Cola?

your boss let you down, ehh

your opinion is only yours, has no value nor spread any concern among the Lebanese, the Saudis are happy with Hariri for being a Saudi citizen and Israel your beloved country loves Ja3ja3, those are facts.... however, Aoun will be the president who defends the axis of resistance and thus the majority of Lebanese, including the ones who openly don't admit it... you have to live with it, trolls.

terrorist didn't you call Hariri a weak person and a disgrace to his father a few days ago?

No wonder Mostaqbal are so weak, when their supporters are back stabbers and without any form of honor.

texaszionist, so we should just take your Mossad advice and give up as your kind said in the 2006 war right?

We are losing in Syria you claim, is that the reason you people cry/whine about SaveAleppo and all that other salafi garbage?

but the article is about Ja3Jas voting finally for Aoun as president and not HA's role in Syria... apparently you're stuck and hurt.

anyway, the resistance is doing a very good job, Aleppo the capital of the fake "revolt" is falling, the the rest to follow, you dream of Daeshist Syria is over... you've to live with it as well! hard, ehh.

is that a winning martyred iranian terrorist shia jihadists family in your avatar?

the difference but you shias and the rest of the Lebanese, is that you follow your terrorist leaders no matter what.... and that is the dishonor in itself. What you just mentioned about @terrorist shows he is not a follower and has a mind of his own to know what is right and what is wrong.

I challenge you to do exactly that although I know the answer. You are driven by your sectarian hatred and whatever your shia leaders do or say it must be right.

Your boyfriend terrorist, he claims to be a staunch supporter of Mostaqbal.
Yet he backstabs his own leader and calls him a weak person.
You are not free thinkers as you like to claim, you just do whatever the new popular trend wants, even if it means smearing your own leader.

No you are the dishonor here, following a leader in the dark and bad times is called Loyalty, something you people know nothing about because March 14 sharaf can always be bought.

A fact is known here texas, you zionists are just happy to see everyone killing each other in Syria.

Now you got Salafi rebels doing the job for you, but don't think your people are safe overthere across the border, the sirens will be heard in Tel Aviv if the zionist decides to invade Lebanon in favor of Wahabism.

@xasusa
in most of your comments you are referring to the situation in Syria while the article is about Aoun election, you are stuck therefore you want to change the subject but i got you again since you're stupid enough to not realize it, Syria is far away to be under your wahabi control, as well as GiGi won't be the next president, accept the facts, otherwise, besides being the stupid of the forum, you'll be considered the coward one as well.

They are all useless, Geagea is no better. From describing Aoun as a Syrian Iranian sell out to now 100% made in Lebanon, it just proves politics in Lebanon is not about ideas and ideals but about persons. They will ally with the devil to get the positions they are after.

Made in Lebanon???? is it stupidity or wishful thinking? ."You can fool certain people ,and some other for some time but you can't fool all the pople all the time". one former US president have said that.

Geagea is again correct. Tex, you shouldn't be concerned about Aoun handing the State over to Iran. The Lebanese Presidency, in the post-Taif era does not have that power. The PM and Council of Ministers lead the Executive Branch of the Government and nothing such as Tex has suggested can happen without Hariri or whoever is chosen as the next PM, a Sunni politician.
In fact, the worse that could happen would be a repeat of May 7, 2008 when Siniora decided to sack the Hezbollah security chief at the airport and to dismantle the Hezbollah Telephone Network and Hezbollah staged a near coup letting the government know that it was boss, not the government.
This is not 2008. Hezbollah is, militarily preoccupied in Aleppo, otherwise, it would not have allowed anyone to come to the President's chair. The LAF is now stronger and Hezbollah, militarily, not in the same posture as 8 years ago.

So why did they in fact elect Ex President Michel Suleiman, in their prime time before the Syrian war?
According to you they were so strong back then, that no President is needed right?

I will tell you something else, the Resistance wants a President that can accept all parties.
Suleiman was a big waste of President, we all lost respect for him when he took a Pro March 14 stance against the Resistance, he should've been neutral instead.

All we had to do was wait for his term to end, and now we might get a President that is actually an ally and friend to all.

Suliman was elected, you will recall in the wake of the May 2008 Hezbollah attempted coup. He was elected under the aegis of a GCC emir, Thani, I believe. An international solution that Hezbollah then could not resist further.

No President can be elected without the acceptance of All main parties in Lebanon, you know that.
They could've just as easily boycot the sessions in 2008 as they could now.

100% made in Lebanon?! Geagea what credibility do you think yo still have when you utter words like that?

this troll with a new fake name is another shia takiah possessed heretic. His whole rhetoric revolves around attacking sunnis and those who "were" pro syria. Yet, he ignores those who were pro syria and still are pro syria.