Rahi Welcomes Hariri as 'Man of Courage,' and Hariri Says a New Leaf Will Begin Monday 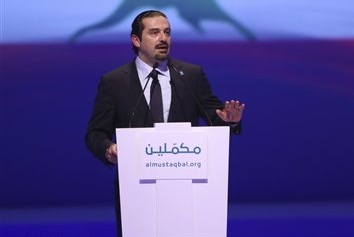 Al-Mustaqbal Movement leader Saad Hariri urged everyone to cooperate for the well interest of Lebanon, pointing to a new leaf that will be opened on Monday after the election of a head of state to fill the longtime vacuum.

“The country is on the threshold of a new phase, and I hope that everyone cooperates for the well interest of Lebanon and the Lebanese,” said Hariri after meeting Maronite Patriarch Beshara al-Rahi in Bkirki.

Hailing the Patriarch Hariri said: “The Patriarch has been keen on the election of a president,” adding “we will all cooperate on Monday. Today we are heading towards a white end to open a new leaf in relations and to begin this phase together,” he said pointing to enormous challenges facing the government.

For his part, Rahi received Hariri and welcomed him as saying: “Welcome you man of courage and determination,” in a clear reference to Hariri's initiative when he endorsed MP Michel Aoun for the post of president last week.

Speaker Nabih Berri has summoned lawmakers on October 31 for the presidential vote, which will go ahead if a quorum of two-thirds is reached.

Hariri had launched an initiative in late 2015 to nominate Marada Movement MP Suleiman Franjieh for the presidency but his proposal was met with reservations from the country's main Christian parties as well as Hizbullah.

along with M8 who still are collaborating with the very same regime, seems you forget that...

still slogging along eh tricportugal, but you ditched one id and replaced with not just one but two ids, that very "resilient" of you libanobrasil. just to remind you before you let loose on a whole community your attacks were on the right wing. maybe you can explain how did you come to start using the most right wing leader lebanon ever had as your avatar and you did this just around the time you switched your attacks from the right wing to the sunnis, very clever.

They killed his father and now he is licking Hizbullah shoes. Well, it is his right, but to call this courage is a bit senseless.

It is amusing to see you accuse Mostaqbal of being Syrian agents for 30+ years. What about your hezbollah who were and still are Syrian and Iranian tools; are they not traitors? Mostagbal lost their leader Rafic Hariri, Basil Fleyhan, Wissam Eid, Wissam Hassan, Mohamed Shatah, and Mp and Judge Walid Eido to the Syrian occupation ya troll.

I am well pleased to see all the Lebanese people and their leaders coming together
And cooperating with each others for the benefits of all and for the sake of Lebanon who suffered a lot of destruction and neglect. May all who love Lebanon and work hard to rebuild it proper, and may the the Lord give them courage
And wisdom to improve the leaving conditions for all the Lebanese people who suffered so much for so long.

MP's were accomplices and Syrian agents for 30+ years

wow that's amazing so many started to be Syrian agents before they were born!

libanobrasil when you ditched the tricportugal id i was afraid that the unintentional comic relief you provided was lost forever. but i was wrong, now we have you twice as much with two new fresh ids with twice as much comic relief, stay "resilient"

If saad hariri can't run his company, cis he eligible to run Lenanon as Prim Minister