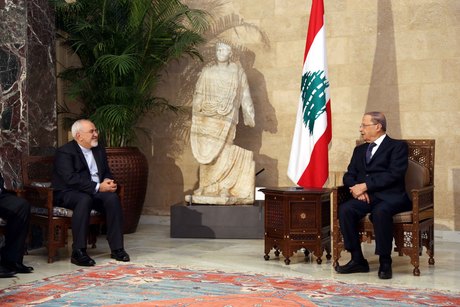 Iranian Foreign Minister Mohammad Javad Zarif held talks Monday in Baabda with newly-elected President Michel Aoun as part of an official visit to Lebanon that will also include meetings with other top Lebanese officials.

“I seized this opportunity to extend the warmest congratulations to President Aoun on his assumption of the presidency, in my name and in the name of Iranian President Hassan Rouhani and all Iranians,” Zarif said after the meeting at the Baabda Palace which was also attended by caretaker Foreign Minister Jebran Bassil.

“We welcomed the fact that the presidential election in Lebanon was held without any foreign interference. Lebanon's success in holding the presidential vote after two and a half years of vacuum is a victory for all Lebanese,” Zarif underlined.

He said his visit is aimed at “developing and boosting bilateral ties at the political and economic levels.”

“Iran and Lebanon have two main enemies – the takfiri enemy and Israel – and this issue is an element for unity between Iran and Lebanon,” Zarif added.

“President Aoun's oath of office reflected his deep political vision that identified the risks that are threatening all countries in the region,” Iran's top diplomat went on to say.

Bassil for his part thanked Iran for "its support and assistance for Lebanon and for its repeated assertion that the domestic issues in Lebanon must be resolved among the Lebanese."

"Lebanon is facing two major threats -- the racist Israeli threat and the Daeshi (Islamic State group) threat. We thank Iran for its assistance in the resistance against Israel and for all the support it has offered to Lebanon," Bassil added.

"We have political ties with Iran that are being reflected at the international forums where we exchange political support... Lebanon and Iran share the same political stance on the region's crises, which is that they must resolved through political solutions," the caretaker FM added.

“My visit to Lebanon at the head of a political-economic delegation is aimed at planning for a better future in the ties between the two countries,” said Zarif upon his arrival at Beirut's Rafik Hariri International Airport.

“We will stand today and tomorrow by Lebanon and we will seek to expand cooperation between the two countries,” he added.

“The resilience of Lebanon, its people and its resistance and the resilience of the peoples of the region will inflict an awful defeat on the terrorists and the extremists,” Zarif went on to say.

As Safir daily reported Monday that the Iranian minister would convey a congratulatory message to Aoun from the Iranian president.

The visit carries political significance seeing as Zarif is among the first foreign officials to visit Lebanon after Aoun's election, knowing that Rouhani was among the first leaders who congratulated Aoun on his election.

Furthermore, As Safir quoted unnamed diplomatic sources as saying that some international delegates are to visit Lebanon soon, including a high-ranking Chinese delegation.

Last week, Aoun, who is allied to Iran-backed Hizbullah, was elected as Lebanon's 13th president, which ended around two and a half years of presidential and political vacuum.

Hariri, who is close to Iran's regional rival Saudi Arabia, was designated on Thursday to form a new cabinet.

Hariri's key endorsement and crucial support from Hizbullah and the Lebanese Forces had largely contributed to Aoun's election.

Coming to visit the servant?

they are the yemeni houthians just like you. now go get a life and preach about sectarianism dear josephani irani.;)

I am sure our "strong" president will demand from this Iranian the immediate release of Nizar Zakka the Lebanese IT Consultant who was wrongfully accused of spying after being lured to Iran by an official Takiah invitation.

First came the Syrian overlords to inspect their latest re-acquisition and to mock the Lebanese who participated in the Cedar Revolution that brought Aoun back to Lebanese soil, now come the Iranian overlords, eager to inspect their share of the prize that they spent so much weapons to conquer. Bravo Aoun, bravo Hizb; you can have your doggy treat now.

Zarif said this and that. What was Aoun's answer?

A meeting should never has taken place until Zakka is out of prison and Iran stop funding its militia and Basij in Lebanon. Aoun talk of sovereignty and independence has an empty echo full of hypocrisy. Same with his meeting from the envoy of the Syrian butcher!

That did not take long...

"Are you President Aoun gonna allow Iran to bluntly trample on the rights of a Lebanese National like that?"

Yes and he already did.