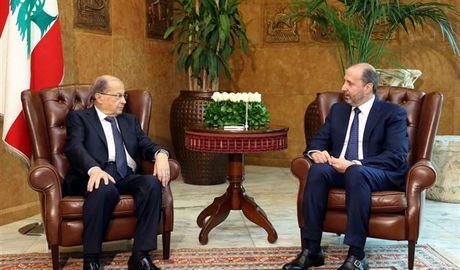 The envoy was accompanied by Syrian Ambassador to Lebanon Ali Abdul Karim Ali, it added.

Azzam conveyed a congratulatory message from Syrian President Bashar Assad to Aoun on his election.

He also emphasized the “deep” ties between Syria and Lebanon.

Last week, Aoun was elected as Lebanon's 13th president, which ended around two and a half years of presidential and political vacuum.

Prime Minister-designate Saad Hariri's key support had contributed to the election of Aoun.

Hariri was designated on Thursday to form Lebanon's cabinet.

He receives the same regime that kicked him out of the presidential palace..... how times have changed.

at some point lebanon needs to be at peace with syria, aoun recognized that years ago, when syrians got out of lebanon. it was harder to make peace with those who collaborated with syria and helped it invade and occupy lebanon (i.e. practically all those in m14) but that also was done. now maybe we can move on, finally.

Even you mowaten of Iran are now at peace with Assad. remember when you broke through ISF lines and barriers in defiance and protest at Assad's occupation of Lebanon only to be met by brute force. If I recall you were also injured during that rough episode. But you forgot and forgave and on March 8 you went out and chanted " Choukran Souriya".

lol mowaten, go hang yourself from a crane in central tehran or better yet go sit on a mine you clown and spare us your sick jokes.

.mowaten. I'm not a big poster here but I have been using this site for over 45 years and recently I have been liking your posts, you're the only one informing these deluded ignorants. :)

Hey mowaten…you are one man army...in this site so many personnels against you and you never backdown you tweet them back like a birdie on twitter...I salute your shia spirit..

I respect Mr. Mowaten because he finally decided it is time to move on.

keep clowning around with your fake accounts, i know you hate that lebanon and syria are close and have good ties now.
you israelis always prefer when are at war with each other.

everybody who exposes you for the cheap sectarian paid troll that you are is a fake account huh?

@barrymore: are you seriously telling me those one-liner accounts that follow me around and always post the same broken records after me arent fake accounts?
walid, shah, puppet, rita nahhas, CFTC and dozens of others, yet somehow terrorist the clown thinks it's me making fake accounts. lol

Great news. Now we have better ties with over good neighbours.

President Aoun does not care about old grievances, he seeks stability in Lebanon.

good neighbors? So why are you killing them;)?

Yes according to you, isis and Al Qaeda are good neighbours.

no anonyme, we "all know" bashar personally killed 200,000 babies and 100,000 women with his own hands. and so the US created nusra and ISIS and the FSA because they care so much about cute little babies and want to save them.

since you have the link anonyme, i suggest you watch it, and listen. really listen, and dont try to make up answers that dont exist or bend them to suit your twisted narrative.

it's even more inconceivable that you dont get it, since you had that link and it is so clearly explained only 3 minutes into the interview

admit it, you never even watched it in the first place, did you?

you have mental issues anonyme.

you claim to be a jack of all trades ya irani, but a psychiatrist too????

The principals of M14 go way beyond Hariri and Geagea and never die. They are what free and independent thinkers aspire for.

actually, the only one who remains active and represents M14 free thoughts is Rifi, an Al Nusra's follower....what a shitty aspiration!

btw, the ones who voted and still supporting him possess the same characteristics.

mowaten of iran once said :

".mowaten.
nobody who is anybody follows, respects or fears Rifi."

@Southern, you must be a nobody then.

@mowaten is right, because i disrespect Rifi and he doesn't worry me.

you see! what a mess you make whenever you try to state something by your own!!

if he does not worry you then stop mentioning him in every one of your posts ya troll.

Did Rifis so called tough guy stance prevent Aoun from being elected?

He is a farce just like the rest of you.

Did Nassrallah's tough talk and bravado prevent those two dead shia terrorists in your avatar from being killed?

being a narrow-minded individual, i hope that this info will help your curiosity and don't twist it if someone asks you about the Lebanese different sects and their origin...ahh! you belong to group ³ .

I am sure our "strong" president demanded from this Syrian regime envoy that his government hand over Ali Mamlouk who is indicted by the Lebanese Judiciary for his involvement in the twin bombings in Tripoli.

If Aoun truly respects the Lebanese justice system he would have asked this lowlife syrian during the meeting. But he does not have the guts to do it. Then he talks about "nobody is above the law".