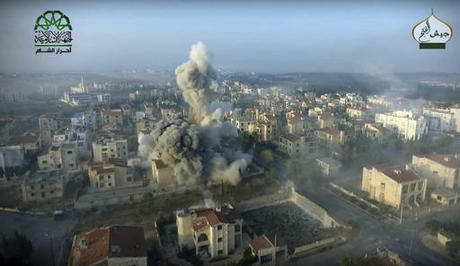 Syrian government forces regained control Saturday of areas they lost over the past two weeks to a rebel offensive on the edge of the northern city of Aleppo, ending a major attempt by insurgents to break the siege on eastern parts of the city, an activist group and pro-government media said.

The insurgents had seized a couple of strategic areas in western Aleppo after launching an offensive on Oct. 28 in an attempt to break the siege imposed in July on rebel-held eastern Aleppo, which has also been targeted by waves of Syrian and Russian airstrikes.

Russia said last month that it would halt the airstrikes on the city and urged insurgents to leave. But the fighters, including members of the al-Qaida-linked Fatah al-Sham Front, refused to leave after the government opened corridors for them to cross to the nearby province of Idlib, an insurgent stronghold.

The Britain-based Syrian Observatory for Human Rights said Saturday that government forces and their allies have regained control of Al-Assad and Minyan districts, west of Aleppo.

"The epic battle for Aleppo has failed," said the Observatory's chief Rami Abdurrahman, using the term that the insurgents had assigned to the offensive.

Syrian state media reported that the two districts have been retaken. State TV reported live from inside Minyan, which appeared to be under the firm control of government troops.

"We fought them in every street, house, neighborhood and schools, and they used mosques to launch attacks," an army brigadier general in Minyan who identified himself as Nabil told Al-Manar TV. The network is run by the Lebanese militant group Hezbollah, which is fighting alongside Assad's forces.

The Observatory said the fighting left 508 dead, including civilians and fighters from both sides. It said the dead insurgents included 90 foreign fighters while on the government side, 83 troops, 28 Hezbollah gunmen and 41 other fighters from Iran and Iraq were killed as well.

On Thursday, Jan Egeland, the special adviser to the U.N. envoy for Syria, said the last food rations in besieged eastern Aleppo will run out by next week. Speaking in Geneva, Egeland said the last time the more than 250,000 people inside east Aleppo received any humanitarian aid was in the beginning of July. Residents and activists in besieged east Aleppo have spoken of rising prices of food products due to the siege.

Russia's military says it is willing to consider a new humanitarian pause for Aleppo if U.N. officials confirm their readiness to deliver aid and evacuate wounded and sick civilians.

Defense Ministry spokesman Maj. Gen. Igor Konashenkov said Saturday that such aid had been blocked by the insurgents during previous pauses in the fighting, which "showed that assurances of U.N. representatives about 'preliminary' agreements with militants in Aleppo are just words."

The capture of Minyan and Al-Assad came a day after the Russian military and a main Syrian opposition group traded allegations that the Syrian military or rebels used chemical weapons in Aleppo.

but according to assad and hezbollah there were never any rebel gains or advances to begin with:)

According to you in Al Qaeda Orient News, you are still in control of those areas.

another troll bites the dust;)

Here the Al Qaeda Oriented News states something differently.
This is from their English page.

I respect Mr. Flamethrower because he already discovered the joys of copy and paste.

so your shia one cell brain understood Orient news reported the areas fell to the militias first and then reported the fighting was still ongoing or vice versa?

When the Russian air force is not in action, the shia militias get obliterated by the rebels who own the land.

The Syrian Army + Resistance did manage to repel the Salafi offensive before the Russians started bombing again.

Your Salafi rebels attacks in swarms, and the Resistance fires and fires and the Salafis keeps coming in waves after waves, you are real vermin you people.

The Russian airstrikes does help, bombing the salafis before they have time to regroup.

nobody must win,everytime some faction advances it reverses..the fight must continue as long as salafis or faqihis are butchered

it seems trolling gives you the tingles.

I gotta tell you guys no better time to be dead. I spoke to some dead people they told me that following the mass arrival of delusional Jihadis of various smells from AlQa3ida, to Hezballh, to IS and the likes St Peter has set up a popcorn station and terraces from where non Jihadi dead can enjoy the bitch fights between the various Jihadi Martyrs. St Peter, the practical joker that he is, tells one set of Jihadis that the other set of Jihadis are the virgins they were promised and a fight ensues. I was told by a dearly departed that the other day Jihad Mughniyeh smashed Imad Mughniyeh across the head with a folding chair that was meant for Ossma Ben Laden. The agile terrorist al Qa3ida kingpin ducked of the way just in time. It's pandemonium up there. Ole Pete even got a "Mean Gene" Okerlund impersonator to provide the color commentary.