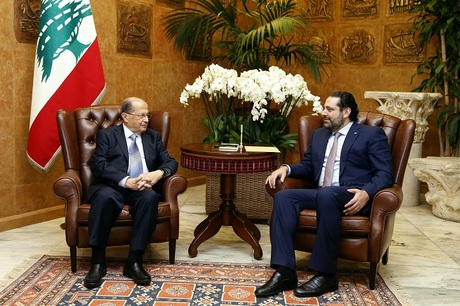 "Some details are being mulled regarding the cabinet line-up and the atmosphere is positive," said Hariri after the meeting.

Asked whether the cabinet line-up will be announced soon, the PM-designate said "God willing."

Several political parties had announced earlier in the day that the government might be formed “within 48 or 72 hours” after resolving the remaining obstacles.

MTV said Hariri submitted to Aoun a draft line-up that might be announced very soon.

The following is the draft line-up as reported by MTV:

- Druze: Marwan Hamadeh (Health, Democratic Gathering) and Lebanese Democratic Party chief MP Talal Arslan for a portfolio that is yet to be allocated.

- Armenians: Hagop Pakradounian (Tashnag Party) for a portfolio that is yet to be allocated and Jean Oghassabian (Administrative Development, Mustaqbal).

The political forces are pushing for forming the new Cabinet before Independence Day, which Lebanon marks on November 22.

According to media reports, a settlement has been reached under which the Lebanese Forces will be given the deputy premier post instead of a so-called sovereign portfolio.

“The biggest obstacle in the wrangling over services-related portfolios is revolving around Marada Movement's insistence to get one of three key portfolios – public works or energy or telecommunications,” LBCI television said.

Useless.... look at both of them sitting among flowers as if it is a wedding while the country has become a fully fledged iranian territory.

Unless the legacy of Bashir Gemayel is followed exactly then Lebnaon will remain a place where the dead bury their dead. The young Lenanese must wake up for they are robbing you. They use religion to steal from you. There should only be one religion. You and your country Lebanon. The evil is still there giving jobs to the thieves. There should be a real election and everyone one should be allowed to run without being killed before the election. I am fine. Are you !?