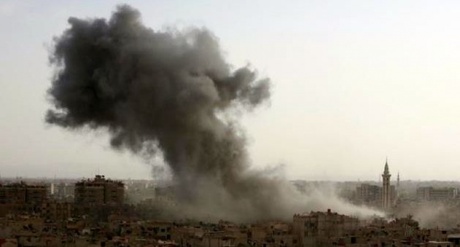 Russian air strikes have killed at least 30 jihadists in rebel-held Idlib province in northwestern Syria, the defence ministry said in a statement on Thursday.

The strikes, which began on Tuesday, were part of a major operation against jihadists in Idlib and Homs which saw the first missions carried out by Russian warplanes taking off from the Admiral Kuznetsov aircraft carrier that arrived off Syria last week.

In the statement, ministry spokesman Igor Konachenkov said those killed were fighters with the Fateh al-Sham Front.

"According to information from different intelligence sources, at least 30 terrorists were killed," he said, indicating that one of them was a jihadist leader charged with "preparing and carrying out a new offensive in Aleppo".

Idlib province is mostly controlled by a powerful rebel alliance known as the Army of Conquest, which groups Islamist factions with jihadists of the Fateh al-Sham Front, formerly Al-Qaeda's Syrian affiliate.

Russia has been carrying out air strikes on Syria since September 2015 to support the regime of ally Bashar al-Assad and insists it is only hitting "terrorist targets".

The deadly war in Syria has killed more than 300,000 people since it started in March 2011 with a wave of anti-government protests.

According to the Russian invaders every Syrian woman and child are jihadis.

It is amazing how so called Christians have so much love for Al Qaeda and Isis.

not less amazing than an iranian sectarian shia claims to have so much love for Christians.