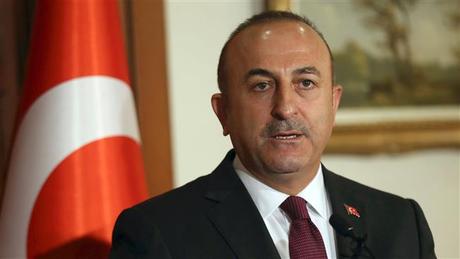 Turkish Foreign Minister Mevlut Cavusoglu is expected to visit Beirut next week carrying a message of congratulations from Turkish President Recep Tayyib Erdogan to newly elected President Michel Aoun, and to highlight the latest developments of concern for both countries following his latest visit to Iran, al-Joumhouria daily reported on Monday.

After his visit to Iran on Saturday where he met with President Hassan Rouhani, Cavusoglu is expected in Beirut to congratulate Aoun on his election, and to hold meetings with senior Lebanese officials including Speaker Nabih Berri, PM-designate Saad Hariri and Caretaker PM Tammam Salam, said the daily.

Talks are said to discuss the latest developments in the region in light of the open connections between the Turkish President and his Russian counterpart Vladimir Putin which dealt in detail with the developments in Syria and the repercussions of the crisis of displaced Syrians on neighboring countries including Lebanon, it added.

The file of the displaced is a joint file between Ankara and Beirut that have cooperated with Jordan in some international and regional conferences devoted to look at the cost of this issue and mitigate the negative implications.

Why is this Turkishstani coming to visit Lebanon? We the Shias of Yemen, Bahrain, Iraq, and Lebanon only want the Iranian Foreign Minister to visit.

Btw, I am a secular atheist Shia and a spokesperson for Hezbollah.

get a life ya troll

All my respect and admiration go to Mr. Mowaten because he knows a troll when he sees one.

seriously, get a life lol

what readership? you mean the trollership

Even on an article regarding a visit by a foreign dignitary, I find you @mowaten spamming, trolling, and terrorizing other posters. What kind of person are you? New evidence surfaces by the minute that you are a paid poster but the question remains who pays you and for what exact purpose? Is it the Iranian embassy, is it the revolutionary guard, is it the syrian intelligence or the ex-KGB? These questions must be answered by you and NOW!