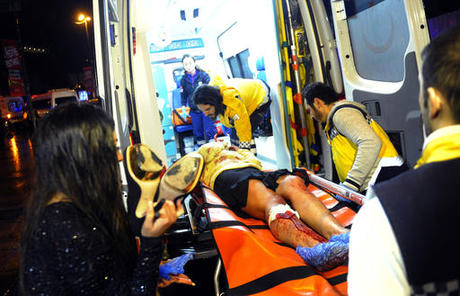 Three Lebanese citizens were killed and four others were injured in the New Year's Eve massacre at an Istanbul nightclub, Lebanon's consul general in the Turkish city said on Sunday.

"The staff of the consulate general are still visiting hospitals in the city of Istanbul to confirm that there are no other Lebanese casualties, at the instructions of Foreign Minister Jebran Bassil," NNA added.

Wardini, 25, was confirmed dead earlier in the day after State Minister for Planning Affairs Michel Pharaon and MP Nadim Gemayel contacted sources in Turkey, who said that Wardini's body was found in a hospital's morgue.

Earlier media reports had said that Wardini escaped the attack after throwing himself into the Bosphorus Strait.

The wounded Bushra Doueihi is the daughter of Zgharta MP Estephan Doueihi. She was critically injured in the attack according to media reports.

Hassan Bsherrawi, brother of wounded Lebanese national Nidal Bsherrawi, said earlier in the day that “Nidal, Francois al-Asmar and Nasser Beshara are in a stable condition while the daughter of MP Estephan Doueihi is in a critical condition and is undergoing surgeries.”

Thirty-nine people, including many foreigners, were killed when a gunman went on a rampage at the Reina club, one of Istanbul's most exclusive nightspots, where revelers were celebrating the New Year.

Cowards and scums at work. May all the victims Rest In Peace and may the good lord help their families in their grief.

I respect Mr. Nonabel. because he believes in the good Lord and his powers.

May God let the lights of His Power perpetually shine upon the innocent souls of those victims who perished and work in them the good purpose of His perfect Will.

All my respect to nonabel for his condolences towards the victims of the night club bombing.

I disrespect nona2017 because he tries to be relevant when all on this forum know he's irrelevant and insignificant.

yes unlike you, troll.

May all the victims who lost thier lives rest in peace & for those who got injured hope to get well soon.