Aoun: No One Should be Stronger than State and I'm Not Thinking of a 2nd Term 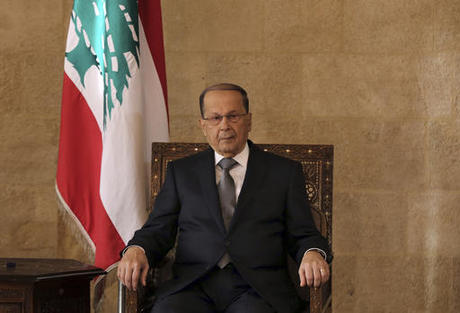 President Michel Aoun stressed Sunday that “no one should be stronger than the State” in Lebanon as he ruled out running for a second presidential term.

“Lebanon is facing the last chance to build a strong State in it through creating institutions that work for the welfare of the country and its citizens,” Aoun said in an interview with French news channel LCI.

“No one should be stronger than the State, because that would lead us into chaos,” Aoun warned.

Asked whether he is considering a second presidential term, Aoun said: “I'm not thinking of a second term and I prefer to have a good successor.”

Aoun said: “I'm not thinking of a second term and I prefer to have a good successor.”

I'm confused - I thought that in Lebanon the president is limited to one term by law... Has that changed??

Lets support our president. Most people can see by now that he is actually trying to achieve something for Lebanon. Being president in Lebanon is always going to be like balancing on a tightrope, and Aoun is at present one of the few that can do that. At the same time he is bringing power back to the presidency, sonething that was especially absent during Hrawis and Lahouds tenures in Baabda.

All Lebanese presidents have exactly the same powers under the constitution. Some talk and make noise more than others.

and in your case, you oink.

another day, another sunday, another hour, another article as flamethrower embarks on yet another journey in pursuit of his childhood dream of achieving a gold medal in trolling.

They do, but its how they make use of their power thats the question here. So far it looks promising, but as always there are a lot of obstackles in the way.

hahaha u're so funny, flamethrower when you're unhinged (':

I sure hope that I will not be scorned and admonished when I say that my respect for general aoun who is now president is increasing every minute and specifically for saying that No one should be stronger than the State, because that would lead us into chaos.

I also admire him for saying he is not thinking of a second term and he prefers to have a good successor.

I do respect him.

Read your comment over and over again, please! I want you to see how awesome and ruthless you are when dealing with these delusional trolls. Your finesse, wit, facts, and approach leave them speechless, defenseless, and dizzy.

No wonder my Nepalese domestic helper thinks the world of you and religiously follows your every move. You are a legend, an icon of modern times, a hero for all of us.

even in jokes you have to put your country first!

btw it was a French doctor!

southern, you will be found!

You cannot have a second term it's unconstitutional; unless you plan to use iran's militia to usurp power.

he is unfit to be president and a disgrace to humanity.

what do expect a sell out traitor made president by iran and assad to say?

He is praising Assad while the ink of his oath of office has not dried up yet in which he pledged neutrality in the region's conflicts.

yes, he distorted flamethrower. Exceeding the state's ability does not mean it is bigger or stronger than the state or its ability to handle it.

Mickey likes to think that he has the right to run for a second consecutive term but "prefers" to have a successor, how cute.

Here Mickey read this from Article 49:
"The President's term is six years. He may not be re-elected until six years after the expiration of his last mandate."
OK Mickey you can run again but having a successor is not your "preference" it's mandatory, by then you're 93 years old. At 93 years old you will be officially Lebanon's first Cryptkeeper rather than it's 20th president.