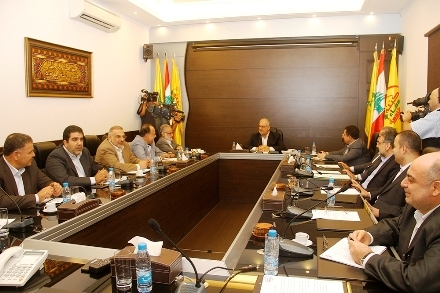 Hizbullah's Loyalty to Resistance parliamentary bloc noted Thursday that it is still “possible” to reach a “positive agreement” over the electoral law, as it reiterated its call for an electoral law fully based on the proportional representation system.

“Any agreement on a new electoral law must conform with the stipulations of the Document of National Accord (Taef Accord) and the constitution in terms of ensuring equal power-sharing (between Christians and Muslims), enhancing coexistence, and securing correct, comprehensive and effective representation,” said the bloc in a statement issued after its weekly meeting.

“After the bloc was briefed on the deliberations of the interlocutors and on the points of agreement and contention, it stressed its keenness on the continuation of consultations and pointed out that it is possible to reach a positive agreement,” Loyalty to Resistance added.

It also emphasized that “the debate must always be based on constitution and the Document of National Accord” and that it must “avoid selectivity.”

And while reiterating its rejection of a new extension of the parliament's term, the bloc renewed its call for an electoral law “fully based on proportional representation and a single electoral district or several large electorates.”

“This is the format that is compatible with the constitution and free of selectivity,” Loyalty to Resistance noted.

While al-Mustaqbal Movement has rejected a law fully based on proportional representation, arguing that Hizbullah's weapons would prevents serious competition in the party's strongholds, the Democratic Gathering led by MP Walid Jumblat has totally rejected proportional representation, even within a hybrid law, warning that it would “marginalize” the minority Druze community.

Loyalty to the filthy murdering militia