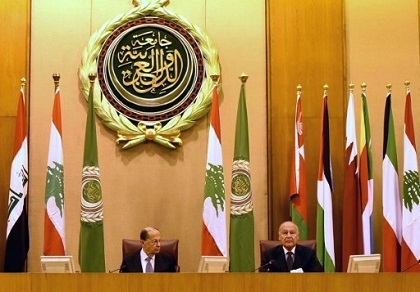 President Michel Aoun stated in front of Arab League delegates in Cairo on Tuesday that Lebanon has regained its strength and is ready to carry on with its role within the Arab family.

“Today, Lebanon has recovered its well-being and is ready to carry out its role within the big Arab family. It is ready to contribute to each project that raises our people to stability and progress,” stated Aoun.

“The world is once again living a World War III, but a fragmented one,” added the President.

“The Zionist ideology has succeeded in transforming the Zionist-Arab war into a sectarian inter-Arab war which justifies Israel's Judaization. This alone is enough to make us unite our efforts to preserve the holy Christian and Muslim landmarks. Lebanon has restored its wellbeing and ready to carry out its role,” concluded Aoun.

Aoun's comments came after a meeting he held with Ahmed Abul Gheit, secretary general of the Cairo-based Arab League.

The president later arrived in Jordan for talks with King Abdullah II.

“President Aoun focused during his talks with Jordan's king on the need to coordinate efforts to find solutions to the Syrian refugee crisis and end the refugees' plight,” LBCI TV reported.

The Jordanian monarch for his part decided to “boost security cooperation” with Lebanon and “raise the number of Lebanese officers who take part in training courses” in the kingdom, the TV network added.

Aoun had arrived in Egypt on Monday, his first visit to Cairo since his election in October. He held talks with his Egyptian counterpart Abdel Fattah al-Sisi and religious leaders.

At a joint press conference with Sisi, Aoun had said: “Hopes of the role that Egypt could play are high. An Egypt of moderation and openness... could launch an Arab rescue initiative based on a strategy to fight terrorism.”

For his part, Sisi said the two sides "agreed on the need to stand together against the dangers of terrorism", adding that Egypt was ready "to support the capabilities of Lebanon's army and its various security bodies".

Instead of trying to mend ties with Israel, he instead burns bridges.

What a failure & disappointment he has become.

Aoun was given a chance to show presidential traits and quickly blew it away. He is a puppet of Hizb. Hizb objective is nothing short of making Lebanon a colony of Iran's Junta and a bargaining ship in its nuclear ambitions. As Hizb has sacrificed Lebanon in 2006 and caused the destruction of Shia cities, it will do it again without hesitation as it is nothing more than Iran Junta’s occupation army in Lebanon. As to its fake claim of restoring pride and defiance… we heard that before in North Korea. As to Hizb 95% support among Shia, it is the same as Saddam or Kaddafi 95% support that suddenly disappeared once their brutal regime was toppled. When would the Shia wake up to this poison among them infecting the whole country. As to Aoun, his case is hopeless and the damage he is causing Lebanon’s sovereignty, independence and prosperity will impact generations to come.