US Under Pressure on Syria Stance ahead of Geneva Talks 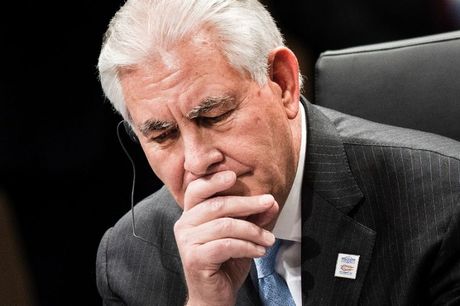 US Secretary of State Rex Tillerson on Friday faced a grilling by global peers seeking clarity on Washington's position on the Syria conflict ahead of UN peace talks in Geneva.

On the sidelines of a G20 gathering in Germany, Tillerson joined a group of countries supporting the Syrian opposition for talks pushing a political solution to the nearly six-year war.

It is the first meeting of the so-called "like-minded" nations -- made up of around a dozen Western and Arab countries as well as Turkey -- since US President Donald Trump took office.

Tillerson, on his first diplomatic trip abroad, will face pressure to spell out where Trump stands on the future of Syrian President Bashar al-Assad.

"It will be an opportunity to gauge the American position on the political aspect of the Syrian issue," a French diplomatic source told AFP.

The meeting came ahead of a new round of United Nations-led talks in Geneva on February 23 involving Syrian regime and rebel representatives.

Under Trump's predecessor Barack Obama, Washington insisted Assad had to go, putting it at odds with Moscow which backs the Syrian leader.

Trump has called for closer cooperation with Moscow in the fight against the Islamic State jihadist group in Syria, leaving the Assad question open.

With Russia's sway in the conflict growing, Moscow has seized the initiative by hosting separate peace talks in Kazakhstan along with Turkey, to broker a fragile six-week truce between Syria's warring parties but making little other progress.

"It's essential to know what the US administration has in mind," a European diplomat said ahead of Friday's talks in the German city of Bonn.

"Our goal is to make sure to bring the (peace) process back under UN control," the source added.

German Foreign Minister Sigmar Gabriel, host of the G20 meeting, said he wanted the "like-minded" countries to speak as one.

"What we need is unity so we can achieve the resumption of negotiations in Geneva between the different interest groups and parties to the Syrian conflict."

- 'Reassurance' -Tillerson has used the two-day G20 to meet with a string of foreign counterparts unsure about what Trump's "America First" policy means for the rest of the world.

He moved to reassure nervous allies with a cautious approach to Russia, signalling there would be no radical shift despite Trump's pledges to seek a softer line.

Speaking after his first sitdown with Russian Foreign Minister Sergei Lavrov on Thursday, Tillerson said the US sought cooperation with Moscow only when doing so "will benefit the American people".

Tillerson may use the final day of the G20 gathering of the world's leading and developing economies to hold talks with his Chinese counterpart, after Sino-US ties got off to a rocky start under Trump.

Trump angered Beijing by questioning the "One China" policy agreed in the 1970s as the basis for what has become one of the most important global relationships.

Chinese Foreign Minister Wang Yi only agreed to go to Bonn after a conciliatory phone call between Trump and President Xi Jinping in which the US president backtracked on his earlier comments.

After the G20 ends on Friday, the action moves to the high-profile Munich Security Conference where US Vice-President Mike Pence will make his international debut.

"He's going to reassure our allies of our commitment to our European partners and the reassurance for the transatlantic alliance," a senior White House adviser said.

In a speech on Saturday, Pence is expected to reassert Washington's commitment to NATO while pressing member states to follow through on pledges to share more of the defense spending burden with Washington.

Only good thing about isolationist Trump is that he will meddle less in the Middle East.