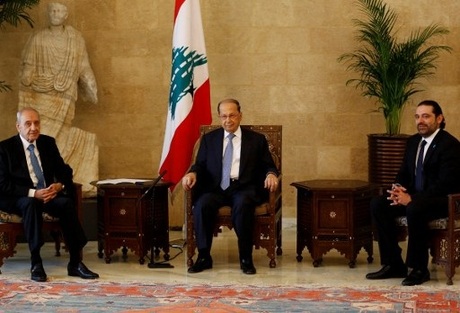 President Michel Aoun might call for a national dialogue among the leaders of the political parties in Baabda or he might agree with Prime Minister Saad Hariri on holding consecutive cabinet sessions, with the aim of reaching consensus over a new electoral law before the March 21 deadline, a media report said on Wednesday.

“The upcoming period could witness an important development in terms of changing the discussion mechanisms that are being implemented to reach a political understanding on a new law,” An Nahar newspaper quoted unnamed sources as saying.

The new mechanisms “might speed up efforts to end the crisis, which can no longer withstand further delay caused by futile mechanisms, such as the experience of the four-party committee that has failed to reach the minimum level of agreement on numerous proposals,” the sources added.

The sources said that two scenarios seem to be likely to resolve the crisis.

“Either President Michel Aoun calls for a dialogue among political leaders at the Baabda Palace or he agrees with the premier on holding consecutive cabinet sessions aimed at approving an electoral law,” the sources said.

“The pressing deadlines will push the political class and the government to put an end to procrastination, which has started to threaten negative repercussions at all levels,” the sources went on to say.

why doesn't the traitor call for national dialogue to discuss the weapons of the terrorist party and the national defense strategy?