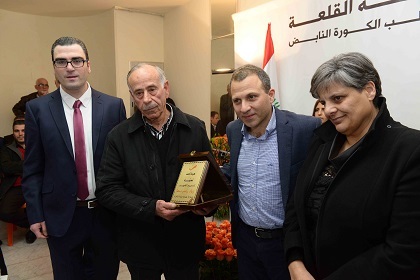 Free Patriotic Movement chief Jebran Bassil warned Sunday that the FPM would insist anew on a controversial electoral law under which each sect elects its own MPs should the parties reject a new draft electoral law that he intends to propose.

“Do we want people's opinion? Do we want to stay confined to the 1960 law or should we move forward?” Bassil asked.

Reminding that he had proposed two hybrid electoral laws and that the parties rejected them due to a dispute over “one or two seats,” Bassil expressed his readiness to propose a third electoral law.

“But what will happen should the parties reject this third law? We will then return to insisting on the Orthodox Gathering law, which we had sacrificed and which achieves real equal power-sharing between Christians and Muslims and a correct representation of the sects,” the FPM chief warned.

“If the intention is not to organize elections and procrastination, we are not a minority and no one can strike deals at our expense and we are not willing to lose more time,” he added.

So election law has become the most important problem that lebanon is facing.
illegal armed militias, refugees, threat of terrorism, no electricity, high unemployment rate , economic disaster looming, no infrastructure to speak of, corruption at all levels of government and yet this butterfly is threatening of grave consequences if he doesn't get a couple of seats in a dysfunctional parliament.