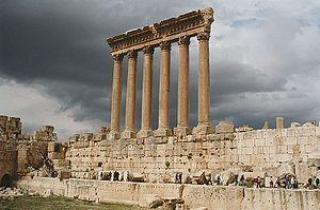 A member of the jihadist group al-Nusra Front was arrested Thursday in the eastern Lebanese city of Baalbek, state-run National News Agency reported.

NNA said the man was arrested by State Security agents after “a close surveillance operation.”

“He is an official of the so-called al-Sham Brigades, which operate in Arsal's outskirts and are affiliated with al-Nusra Front,” the agency added.

The photo makes me think, what happens if the Wahhabi freaks reach Lebanon again? In addition to the minorities they will try to exterminate, they will also try to destroy archaeological treasures.

"what happens if the Wahhabi freaks reach Lebanon again" >> nothing except they get shredded, again. thanks to the Lebanese army, people & resistance.

i wonder if euthanasia wouldnt be the most merciful outcome for a creature like you.

@_mowaten_
What can one say, another E-X-C-E-L-L-E-N-T comment. I particularly enjoyed the part where you said " thanks to the Lebanese army, people & resistance."