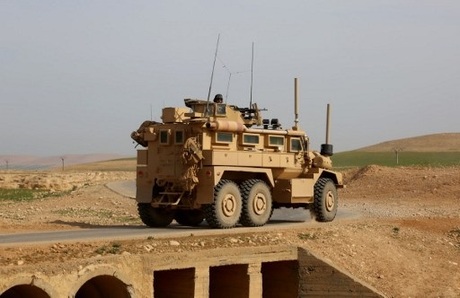 Clashes raged around a key northern Syrian town on Tuesday after the Islamic State group launched a counter-attack to fend off a US-backed advance near the jihadists' stronghold Raqa.

Backed by air power from an international coalition bombing IS, the Syrian Democratic Forces are laying the groundwork for an assault on the heart of the jihadists' so-called "caliphate".

A key part of the campaign is the battle for the IS-held town of Tabqa on the Euphrates River, as well as the adjacent dam and military airport.

The SDF seized the Tabqa airbase late Sunday and began pushing north towards the town itself, but IS fighters doubled down on their defenses on Tuesday, the Syrian Observatory for Human Rights said.

"The fighting is a result of IS launching a counter-offensive to exhaust the Syrian Democratic Forces around the Tabqa military airport," said Observatory head Rami Abdel Rahman.

He said the SDF was working to "consolidate its positions" near the airport ahead of a final push for the town.

SDF fighters are also bearing down on the Tabqa dam after capturing its northern entrance on Friday from IS fighters.

The fight around the structure has been backed by forces from the US-led coalition, with American-made armoured vehicles bearing the markings of the US Marine Corps seen moving along a nearby road.

An AFP correspondent at the dam on Tuesday said it was generally quiet around the dam itself, despite the occasional IS-fired mortar that landed in SDF-controlled parts of the riverbank.

Airplanes could be heard humming above as SDF forces patrolled the northern entrance of the structure.

- 'Acceptable' water levels -On Tuesday, coalition forces could be seen standing near military vehicles less than two kilometres (one mile) from the dam, their mortar rounds casually stacked nearby.

After a brief pause in fighting on Monday to allow technicians to enter the dam complex, SDF fighters resumed their operations around the structure, said spokeswoman Jihan Sheikh Ahmed.

"IS amassed its fighters and attacked our forces in the area, which forced us to respond and resume the operations to liberate the dam," she said.

Earlier this year, the United Nations raised concern about the prospect of damage to the dam in fighting, warning that water levels -- which put pressure on the structure -- were already high.

IS has also issued warnings through its propaganda agency Amaq that the dam "is threatened with collapse at any moment because of American strikes and a large rise in water levels".

On Tuesday, technicians accompanied by the Syrian Arab Red Crescent could be seen examining the dam to assess whether water levels had risen in recent days.

"The explosions and the clashes are threatening the dam, and we ask for all sides to distance themselves from it," said Ismail Jassem, an engineer from the SDF-controlled Tishreen Dam in neighbouring Aleppo province.

"The water levels are acceptable now. We came to open up one of the gates to relieve the pressure," he told AFP.

The SDF launched its offensive for Raqa city in November, seizing around two thirds of the surrounding province, according to the Britain-based Observatory.

At their closest point, the forces are just eight kilometres (five miles) from Raqa city, to the northeast.

But they are mostly further away, between 18 and 29 kilometres from Raqa.

The Observatory, which relies on a network of source on the ground in Syria, said IS had deployed around 900 fighters from Raqa city to various fronts in the wider province.

"Fighting is raging on every front around the city of Raqa, accompanied by non-stop air strikes," Abdel Rahman said.

Syria's conflict began with protests against President Bashar al-Assad in 2011 but has turned into a brutal war pitting government forces, jihadists, rebels, and Kurds against each other.

UN-mediated talks between government and rebel representatives continued Tuesday in Geneva, aimed at bringing an end to the war that has killed 320,000 people.

Exterminate IS.. send them to burn to hell