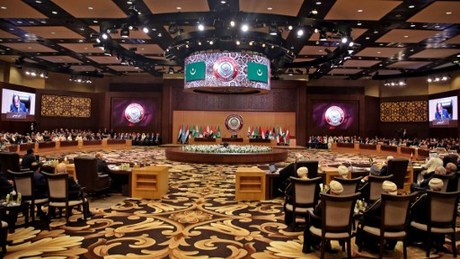 Arab leaders meeting Wednesday at a summit in Jordan denounced "foreign interference" in their affairs, in reference to Iran, and called for the settlement of conflicts that are tearing the region apart.

As at previous summits, the leaders of the 22-member Arab League criticized Iran, but without naming the Shiite-dominated main regional rival of Sunni-ruled Saudi Arabia.

"We reject any intervention in the internal affairs of Arab countries," they said in a declaration at the end of their one-day meeting in the Jordanian town of Sweimeh on the Dead Sea coast.

In their statement, they also called for a revival of "serious and productive peace negotiations between Israelis and Palestinians" and renewed their commitment to a two-state solution.

Since taking office in January, U.S. President Donald Trump has sent mixed signals over how his administration will address the Israeli-Palestinian conflict, including a break with decades of U.S. policy by saying he would be open to a one-state solution if it meant peace.

Palestinian President Mahmoud Abbas told the leaders he would refuse to accept "temporary or regional" attempts to solve the conflict.

Abbas, who met late Tuesday on the sidelines of the summit with Trump adviser Jason Greenblatt, is expected to visit the White House next month.

Arab League head Ahmed Abul Gheit told the summit he regretted the fact that member states were watching "events in Syria without the possibility of intervening," calling the conflict "shameful."

Egyptian President Abdel Fattah al-Sisi said it was "regrettable that certain powers are benefiting from the unprecedented situation in the region to bolster their influence and expand their control" -- in apparent reference to Iran.

"We will not allow any power to intervene in our affairs," said Sisi. "And any attempt at confessional or territorial domination... will have to face a clear and firm Arab position."

Iran is also accused of supporting Shiite Huthi rebels fighting government forces who have been backed by a Saudi-led Arab military coalition since 2015.

Arab leaders have been unable to find common ground on how to end Syria's conflict, which in six years has killed more than 320,000 people and forced millions from their homes.

Various Arab nations support different proxy forces on the ground and there is disagreement on the future of President Bashar Assad, whose country's participation in the Arab League has been suspended since 2011.

While some say Assad must stand down in any peace deal, others, including Sisi, have not insisted on his departure as a condition for a political agreement.

The divisions have allowed other nations including Iran, Russia and Turkey to take the initiative.

The summit's final communique stressed the need to "redouble efforts to find a peaceful solution that preserves the unity of the country, its sovereignty and independence and ends the presence of terrorist groups."

The ministers at the gathering were instructed to find a way to help Arab countries to host millions of Syrian refugees.

Visiting a refugee camp in Jordan ahead of the summit, U.N. Secretary General Antonio Guterres called for differences to be set aside.

"Arab unity is a very important element in order to allow this region to be stabilized and for... the Syrian refugees to find again a future that corresponds to their aspirations," he said.

Jordanian officials had stressed fighting "terrorism" as a major theme of the summit, in particular the threat from IS which is facing U.S.-backed offensives in Iraq and Syria.

Previous Arab League summits have seen little progress in overcoming divisions, and analysts had expected more of the same this time.

"The Arab (political) system is weak, divided and has been plagued by defects for years," said Oraib al-Rantawi, head of the Al-Quds Center for Political Studies. "No breakthrough is expected."

Also in attendance in Jordan was Sudan's President Omar al-Bashir, who is wanted by the International Criminal Court for alleged genocide and war crimes in Darfur.

Human Rights Watch urged Jordan to arrest him, saying it "has the chance to show its commitment to victims of heinous atrocities in Darfur."

how can they pretend calling for unity, when they excluded syria and ganged up on it? the arab league nowadays is only a bunch of brownnoses for the us and israel, offering political cover for bombing campaigns in lybia, palestine and syria.
and now that israel is beating the drums of the next war with lebanon, you can be sure that behind the curtains, the so-called arab leaders have already pocketed their silver coins.
today they openly hold military exercises with israel, how long till they conduct the bombings together?
http://www.haaretz.com/israel-news/1.779823
tfeh

and now they denounce "foreign interference" according to the updated title...

had they the slightest bit of dignity left they would be denouncing US interference and its puppeteering of decrepit tyrants, but nooo! they denounce the invisible menace!

the iranian peril! which is what? iran prevented israel from annexing south lebanon by supporting hezbollah, and it prevented syria from becoming a takfiristan by supporting its government, what crimes! they are not letting israel and the oily kings slaughter arabs in peace!!

and now they are accused of helping yemen, one of the world's poorest country being bullied by a coalition of the richest arab tyrants, who with their shiny US bombers and missiles and the mercenaries they bring from as far as columbia, are still getting their heads knocked in.

the stuff that you iranian troll post here on a daily basis, however, would be reason enough to have you hanged. especially the sectarian incitement and hate mongering!

you belong in a deep pit. filthy iranian agent

eagledawn gets angry because he belongs to the same flock..... a flock of sheep, who admire and defend the ones who humiliate them, Israel and Usa.