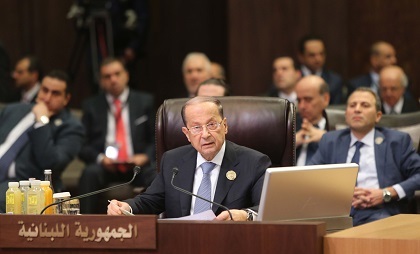 President Michel Aoun warned Wednesday that tiny Lebanon is reeling under the impact of the presence of around two million Syrian and Palestinian refugees on its soil, as he called for an end to the “wars among brothers” in the region.

“Lebanon, which started to recover after its institutions returned to normalcy, is still haunted by anxiety and concern and it has not yet known relief or reassurance, and today it is addressing your conscience,” Aoun said in a speech at the 28th Arab Summit in Jordan, his first since being elected Lebanon's president.

“It is true that the flames raging around it have not reached it, but it is suffering the repercussions and reeling under their burden. We are seeing the misery and pain around us and we are trying to help as much as possible, but when the needed exceeds our capacity, we drown in the burdens and they start to pose a threat to us,” Aoun warned.

He noted that today Lebanon is hosting “Syrians and Palestinians whose numbers are equivalent to half of its Lebanese population,” adding that “the numbers are increasing.”

“As you know, Lebanon with its nature, small territory and scarce resources is a migration and not a resettlement country,” the president told the summit.

He stressed that “alleviating the misery of the displaced and their salvation from the harshness of their mandatory migration, in addition to sparing Lebanon the social, economic, security and political repercussions, can only be achieved through their safe return to their homeland.”

Turning to the situations in the region, Aoun said “Lebanon through its good ties with all the brotherly countries expresses its full readiness to help in bridging the differences and reviving the language of dialogue, because we as Lebanese went through various forms of wars that only ended through dialogue.”

“This critical period obliges us to decide today to end the wars among brothers -- which have many military, economic, journalistic and diplomatic forms – and to sit around the dialogue table in order to specify and respect the legitimate vital interests of each party, or else we will all pay the price of a solution that will be soon imposed on us,” Aoun went on to say.

He urged Arabs to “take an effective initiative that can influence the events, stop the bloodbaths and put out the raging blaze.”

The Arab League's “role today is to reunite Arabs and find fair solutions in the burning countries in order to immunize the Arab world in the face of the current period's challenges and threats,” the president added.

eh, stop killing them in their own country perhaps you won't have as many refugees as you do now.

janobi: most refugees are escaping the areas overtaken by the US-backed/saudi-funded takfiri extremists and other moderate beheaders.
to the contrary, the resistance by true syrians and their allies is the only reason why 16 million people can still live in government-controlled areas in syria.

if saudis, turks, americans, europeans, qataris and others stopped funding, training, arming and organising the terrorist groups safety would be restored in syria overnight and the refugees would be able to go home.

if on the other hand the syrian government collapsed, you could expect another 10 million refugees trying to escape the medieval barbarism of the so-called rebels.

when hasbara trolls have no arguments, they resort to their lame insults. how predictable.

Does he have any shame left.... addressing the Arab Summit and calling for an end to 'Wars among Brothers" while ignoring what his iranian owned militia is doing throughout the Arab world and at the same time legitimizing its existence.

exactly! is the zionism movement sponsored by united states, who are spreading the chaos in middle east to eliminate any threat against the so-called israel.... while some narrow-minded like janoubi or lubnani still hostages to their sectarian mind...

btw, if they are not Lebanese, then they know the message: GET LOST.

I don't see zionism in Syria, Iraq, or Yemen. I see you and your islamic iran spreading wilayat al faqih in arab countries and boasting they now control 4 arab capitals. You are the one who has no shame always questioning the nationality of anyone who has a different point of view to that of your iranian doctrine.

the biggest problem is people like this fake who calls himself ado aka karim aka lebanon08..... lowlife scumbag

Zionism is our biggest problem!? LOL
Bunch of brainwashed sheep!
We can ignore zionists just like Jordans do, or Emiratis, or the entire Arab world. Only the stupid Lebanese need to wage a constant war against Israel huh?? Pffttt... total idiocy!
Our main problem is Ebola! And don't bring up the sheba farms issue. This could perfectly well be solved diplomatically. Pff..

the night security guard is on duty again roaring his usual diatribe.

good, now you are openly admitting what you are. israeli scumbags.

and you call yourself "patriot"!? tfou

Michel Aoun, a decent president among many Israeli-American stooges, traitors!