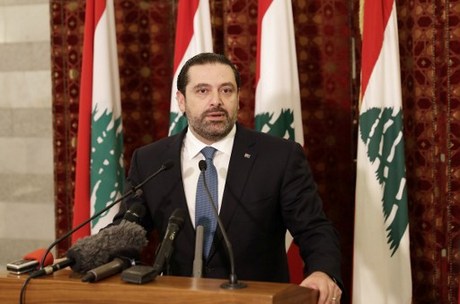 After concluding a visit to Saudi Arabia, Prime Minister Saad Hariri is preparing for a European tour that will begin next week and includes France, Germany and Brussels, al-Joumhouria daily reported on Friday.

The daily obtained information that French President Francoise Hollande, who will receive Hariri on April 3, will honor him from the rank of Knight to the rank of Commodore at a ceremony at the Elysee Palace.

The PM is expected to travel the next day to Germany for talks with German Chancellor Angela Merkel, then moves to Belgium to attend a Brussels conference on helping Syria's neighboring countries cope with the burden of Syrian displacement and to present Lebanon's plan in this regard.

Hariri will present during his tour a new Lebanese approach to the file of the Syrian displacement and the needs of Lebanon to shoulder its burdens.

It will be announced that Lebanon hosts a large number of displaced people as a humanitarian and moral duty pending a political solution to the Syrian crisis so they can return safely to their country.

Hariri will stress that the humanitarian assistance provided by the international community is appreciated, but it is not sufficient for Lebanon to continue to face the pressure on its economy caused by this displacement.

Therefore, it requires assistance to enable Lebanon to cope with this ample amount of displacement through investments in infrastructure, public services and economy.

According to reports, the Brussels conference will be the beginning to explain Lebanon's plan and the mobilization of international support in the hope of obtaining funding for these investments.

Hariri said at the airpoirt in Geneva, on his way to his ski holiday with Brad and Angelina, "Ah, it's good to be home; I like Arabia, but it's so hot!" Accompanying him was the entire Saudi royal family, according to the latest registry from KSA's Ministry of the Registry of the Saudi Royal Family, a total of four persons.