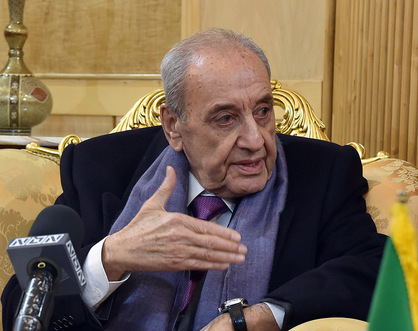 As the parliament prepares to convene on Thursday in a general discussion where MPs will question the cabinet's progress, Speaker Nabih Berri said the session is an “alarm bell” as he urged all political parties to shoulder responsibility and agree on a new law for the upcoming parliamentary polls to avoid vacuum in the legislative institution.

Parties who have recently met the Speaker came out with the impression that “he is not comfortable” and believes Lebanon is facing a difficult stage, An Nahar daily reported Thursday.

Today's session is a “alarm bell”, said Berri and urged everyone to “shoulder their national responsibilities.”

Berri has fears that political parties could fail to agree on a new voting system before mid of April, and he is not certain if they will agree on one in the cabinet paving the way for its referral to parliament for approval and hence a technical extension of the parliament' term, said the daily.

The parliament's ordinary term ends on May 31. Efforts will be carried out to complete a “bitter” term extension in order to preserve the legislative institution so it won't slip into vacuum.

The Speaker has warned on numerous occasions that rejecting a “technical” extension of the parliament's term is aimed at “paving the way for vacuum in parliament consequently the other constitutional institutions.”

MP Ibrahim Kanaan of the FPM had announced Tuesday after meeting Lebanese Forces leader Samir Geagea that the two parties reject a so-called technical extension of parliament's term in the absence of an agreement on a new electoral law.

Berri's visitors have quoted him as reminding that Lebanon has a parliamentary system and that any vacuum in parliament would delegitimize the other institutions seeing as they were either elected by parliament or are operating under the legislature's confidence.