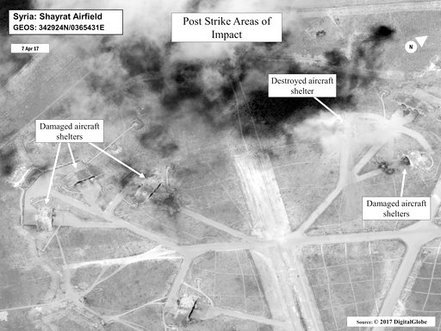 The Pentagon believes the Syrian regime likely has additional chemical weapons stocks at the airfield struck by U.S. missiles last week, but these were deliberately left untouched, an official said Monday.

President Donald Trump ordered a massive military strike on the air base last week, in retaliation for a "barbaric" chemical attack he blamed on Assad.

"We suspected there was a significant probability there could be other chemical weapons which would be ready to go, weaponized in those facilities, and so we didn't strike those," Thomas told reporters.

The chemical stocks were left untouched because the Pentagon did not want to risk unintentionally sending a plume of toxic gas across parts of Syria.

Though the United States is confident Assad is stockpiling chemical weapons, intelligence analysts are not certain what these are.

Under a 2013 Moscow-brokered deal, Assad was supposed to have dismantled Syria's chemical weapons arsenal and ship it to Russia.

The Pentagon has said it is sure Assad unleashed a chemical attack on April 4 that killed at least 87 civilians in the rebel-held Syrian town of Khan Sheikhun.

"Our advice was to make sure we didn't inflict any greater damage by touching any of the chemical weapons in the area," Thomas added.

"We were trying to degrade their capability to launch aircraft and to load them up with chemical weapons."

The Pentagon says the strike destroyed more than 20 Syrian jets but the military has come under criticism for not targeting Shayrat's runways, amid reports regime planes were again using the base hours after the attack by 59 Tomahawk cruise missiles.

Thomas said the runways were deliberately avoided because the United States was trying to draw a clear line that its military action was in response to the suspected chemical attack, and not signal a willingness to get more involved in Syria's brutal civil war.

U.S. forces gave Moscow a heads up shortly before Friday's strike, as Russian personnel and equipment were based at Shayrat under Russia's ongoing military intervention to prop up Assad.

Moscow reacted furiously to the U.S. strike and immediately threatened to suspend a vital hotline established to avoid mishaps between the two powers in Syria.

Thomas refused to confirm whether the so-called "deconfliction line" remains operational, but said that even without it, "there are still ways for the pilots to hail each other."

While U.S. and Russian pilots can use radar to see each other, the lack of a direct line of communication would further heighten the risks of misunderstandings or accidents in Syria's already crowded skies.

So much baseless speculation. Fake news?

are you still embedded with the iranian revolutionary guards in Syria? Do you ever sleep ya heretic or you live in the USA and enjoy its freedom and are paid to post propaganda on this forum?

the only news the troll above trusts is SANA, IRNA and Al Manar.

LOOOOOL because you think there's anyone left on earth who believes the pentagon? Besides you of course, I bet you are still waiting for them to find saddam's WMDs

@mowaten
What can one say, another E-X-C-E-L-L-E-N-T comment. I particularly enjoyed the part where you said " I bet you are still waiting for them to find saddam's WMDs "

and who fabricated Saddam's Weapons of Mass Destruction lie other than you heretics including iran, ahmad jalabi and nawreh al malki?

hahahahaha incredible. who could have thought so much bad faith could be possible. even for you paid trolls this is pushing it.

how do you argue with 'brains' eaten away by the cancer of wilayat al faqih.
you dont.