U.N. Condemns Attack, Calls for Respect of Freedom of Movement of UNIFIL 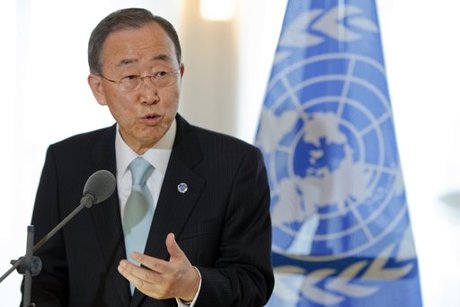 The U.N. Security Council and Secretary-General Ban Ki-moon condemned Friday’s attack against a French UNIFIL patrol in southern Lebanon, hoping the perpetrators will be identified and calling for the respect of the freedom of movement of peacekeepers.

In a statement, the members of the Security Council condemned “in the strongest terms the terrorist attack” and “all attempts to threaten the security and stability of Lebanon.”

They “reaffirmed their determination to ensure that no such acts of intimidation will prevent UNIFIL from implementing its mandate.”

The 15-member body called on all parties to abide scrupulously by their obligation to respect the safety of UNIFIL and other U.N. personnel, and to ensure that the freedom of movement of the mission is fully respected.

The Council members also “called for enhanced cooperation between the Lebanese Armed Forces and UNIFIL and for the rapid finalization of this investigation.”

“The Secretary-General strongly condemns this morning's attack against a UNIFIL vehicle near the town of Tyre, inside UNIFIL's area of operations,” Ban’s spokesman said.

“UNIFIL and Lebanese authorities are cooperating closely in the ongoing investigation, which aims to ascertain the facts. The Secretary-General expects that the perpetrators will be swiftly identified and brought to justice,” the spokesman added.

“This attack on UNIFIL, the third since May 2011, is deeply disturbing. The security and safety of all United Nations personnel in Lebanon is of paramount importance,” he quoted Ban as saying.

Useless organisation from its birth to now, nothing but stupidities and just condemning all day all night doing nothing to preserve peace, nobody applies its resolutions and specially not Israel, so i say dissolve this worthless circus and give the money paid for the salary of ban-ki moon and other puppets to poor countries in Africa.

I also condemn the attack. Now move them to the other side of the border because their mission is to protect filthy Israel not Lebanon. Just take them and go.