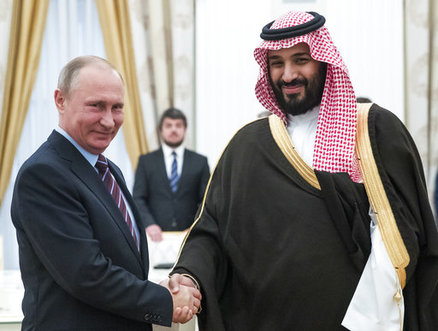 Russian President Vladimir Putin on Tuesday discussed cooperation on oil and the conflict in Syria with powerful Saudi Deputy Crown Prince Mohammed bin Salman at a meeting in the Kremlin.

Oil producers within and outside the OPEC cartel last week agreed to extend a November accord to cut crude production by nine months in a move spearheaded by Moscow and Riyadh.

"We are grateful to you for your ideas and joint work on the combined steps by OPEC members and non-members," Putin told 31-year-old Prince Mohammed, who is also the country's defense minister, the Interfax news agency reported.

"The actions we agreed are helping to stabilize the situation on the world hydrocarbon markets."

The world's two biggest producers have worked together to bolster faltering oil prices despite deep differences over the conflict in Syria and Moscow's warm ties with Saudi Arabia's regional foe Iran.

Putin told Prince Mohammed that Moscow and Riyadh "together were working on the issues of resolving difficult situations, including in Syria."

Putin again reiterated an invitation for Saudi monarch King Salman to visit Russia and insisted it would be a "good sign and a good signal."

Putin again reiterated an invitation for Saudi monarch King Salman to visit Russia and insisted it would be a "good sign and a good signal."

So putin too now wants to dance with Salman;)

this is what the syrian war is all about : oil and the passage of pipelines either from the gulf or from iran....

My handsome Prince oh how he towers over tiny putin.

A man like no other; a knight ; a dream come true; a true thoroughbred.

On which front did your Knight Prince fight?

He sends other young kids to die in his place, because he is not a fighter he is a kid with a golden spoon up his rectum.

you sound bitter and jealous, poor miss tic.... you d like that spoon don't you LOL

This is what they die for in Yemen.

By the way, Sayed Hassan did fight back in the South, before he became the leader of the Resistance.

think of AFP, Agence France Presse, to whom Naharnet turns when in doubt.
This phrase means, "When they replace the monarchy with democracy, this guy will be the first President."

Lol, so powerful, I can hear the Mustaqbaloids soaking their panties.

I meant I can feel the Mustaqbaloids soaking my panties and that I should have kept that to myself and them. Anyway please I beg of you for the love of the party of god don't tell my boyfriend the_roar he will get mad and beat me up again, for being unfaithful again..

Minime, go back to your bedroom, or you will get the shahaita.