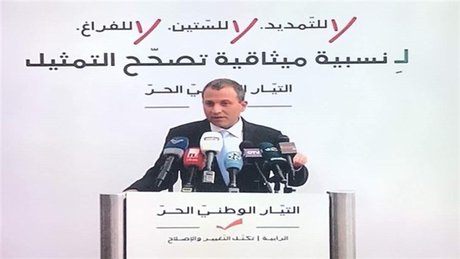 The Change and Reform parliamentary bloc announced Tuesday that it is against “any encroachment on the president's powers,” amid a row between President Michel Aoun and Speaker Nabih Berri over who between them has the jurisdiction to open an extraordinary legislative session.

“We reject any encroachment on the president's powers,” Free Patriotic Movement chief Jebran Bassil said after the bloc's weekly meeting, adding that “the Constitution's articles are clear in this regard.”

He however reassured that “there is no political dispute” over the issue of opening an extraordinary session, noting that Aoun and Prime Minister Saad Hariri are inclined to do so.

“The needed restraints are the prevention of any numerical hegemony and respecting regional and sectarian representation,” Bassil said.

But he called for “the implementation of the Taef Accord and returning the number of parliamentary seats to 108,” noting that the Syrian regime had “added seats to manipulate people's will” during the presence of Syrian forces in Lebanon.

” noting that the Syrian regime had “added seats to manipulate people's will” during the presence of Syrian forces in Lebanon.

the syrian regime that you are now allied with and you and walid muallem understand each other "through' the eyes;)

good idea- will save us from 20 MP salaries with benefits-

and you really think Bassil's call to reduce MPs numbers is driven by his care for the treasury. What Bassil wants is to reduce the number of MPs and eliminate Christian seats in Moslem areas so that he and his party can only influence Christian votes. It goes without saying that would lead to reducing equally the number of Moslem MPs.

Then its a win-win-situation. Lets do it!

Give the Money Back!