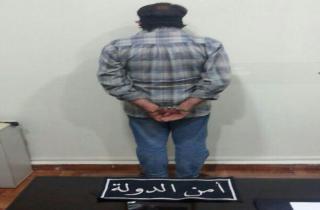 State Security on Tuesday announced the arrest in the Bekaa province of a “former emir of the Ahfad al-Hamza Battalion of the Ahrar al-Sham Front.”

Identifying the detainee as Syrian national M.H., State Security said he was arrested after surveillance and after he raised suspicion that he had ties to terrorist groups.

“During interrogation, he confessed to being a former emir of the Ahfad al-Hamza Battalion of the Ahrar al-Sham Front and that he had maintained communication with the group's members in (Syria's) Idlib,” State Security said.

It added that the 41-year-old detainee had entered Lebanon illegally via the southern border town of Shebaa on August 20, 2015.

“He then resided in the town of Majdal Anjar in the Zahle district,” State Security added.

“The suspect was detained on charges of belonging to a terrorist group and he was later handed over to the Intelligence Directorate of the Lebanese Army at the request of the military prosecution,” the security agency added.

“During interrogation, he confessed......"

he is dressed like an emir. so what crime did he commit?