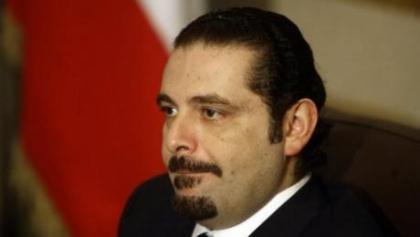 Former premier Saad Hariri on Tuesday reiterated that the latest spate of security incidents in southern Lebanon was a “message” from Syria, accusing Syrian President Bashar al-Assad’s allies in Lebanon of carrying out the attacks.

“The truth is that these things just don't happen, it’s a Syrian message from Bashar through his guys in Lebanon,” Hariri said in English, answering a question from a Twitter user.

The ex-PM lauded Maronite Patriarch Beshara al-Rahi’s latest stance on the possession of weapons in Lebanon by non-state actors, describing it as “important.”

The patriarch’s stance put back “the essential question of weapons on the table,” Hariri tweeted, noting that “this is Bkirki’s historic position.”

He also slammed Premier Najib Miqati’s government, saying it “seems to be in a coma” concerning the latest incidents in the south, accusing it of “ignoring what happened or even hiding the truth.”

Asked whether he regretted engaging in Syrian-Saudi efforts to resolve the political standoff in Lebanon prior to his government’s collapse, Hariri said: “I did what I did for my country, personally it would have cost me but I never regret anything for my country.”

Commenting on Monday’s violation of Lebanon’s airspace by Israeli warplanes, Hariri said: “It’s a serious breach of (U.N. Security Council Resolution) 1701 and we have to be careful because the Israelis are capable of (doing) anything.”

Asked whether Druze leader Walid Jumblat was “switching alliances again,” the former premier and current opposition leader said: “I think Walid Beik is a good reader of the old book called ‘the collapse of the great prison’.”

On whether he believed Hizbullah would ignite a war with Israel to aid Assad and deviate attention from the Syrian uprising, Hariri said: “I don't think so, Hizbullah won't go to war for a falling regime.”

As to the possible rise of “political Islam in the region after the fall of authoritarian regimes,” Hariri said: “I am not worried, I think with these new democracies if they don't meet what people need they will fall.”

Asked whether he supports the creation of a buffer zone on the Lebanese-Syrian border, Hariri said: “I support anything to protect the Syrian people from these thugs.”

“But I think the Turks are doing it,” Hariri added.

M14 really needs a strong leadership in lebanon and hariri should resign from his position if M14 wants to be stronger.
their biggest mistake was to steal the cedar revolutuion from the people and pretend it was theirs. then to appoint hariri as their leader just because he was the son of...thinking it would serve them. he would have been much more efficient and stronger by not being the leader.
but that s the way it goes in lebanon: politics is a business not a dedication to people s rights or demands! ...

..and whose message do you carry?

@peace
I agree...but whom should they appoint leader?
Rafic el Hariri? Pierre Gemayel maybe....? Gebran Tueini would be nice....
Any potential leader representing the freedom of speech and the free mind is assasinated by Syria, or Hezbollah, or the M8 thugs allies...

you are right thepatriot but i believe M14 have good leaders, why not ask for elections within the party as done in all democratic countries: they would set an example for all the lebanese parties based on family business!!!!