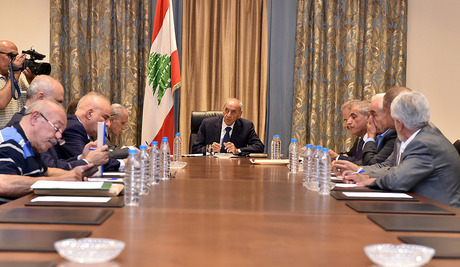 Speaker Nabih Berri on Monday announced that his Development and Liberation bloc had submitted a draft law under which the extended term of the current parliament would expire on December 31, 2017 instead of May 21, 2018.

“In light of the confusion over the issue of the biometric voting card, which is a legal obligation as I have mentioned, … and out of fear of any emergency extension of parliament's term, the bloc submitted this urgent draft law today,” said Berri after a meeting for the bloc in Ain el-Tineh.

According to the speaker, the draft law stipulates that parliament's term -- which has been extended three times since 2009 -- would expire on December 31, 2017, and that the elections should be held before this date in line with the electoral law's stipulations.

The Cabinet had on Sunday approved a suggestion to upgrade the national identity card into a “biometric identity card” that enables citizens to use their IDs to cast votes in the upcoming parliamentary elections.

The introduction of biometric voting cards was one of the excuses that the legislature had announced in order to extend its own term for a third time.

The upcoming parliamentary elections are slated to be held under a proportional representation electoral law for the first time in Lebanon's history.