Syrian Farmer Killed in Mine Explosion at Lebanon Border 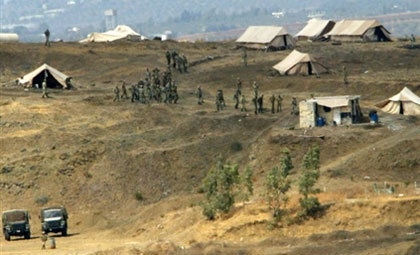 A Syrian farmer was killed on Friday when a landmine exploded as he was driving his truck across an illegal border crossing into Lebanon, a medical source said.

"The man was transferred to a hospital in Akkar in critical condition and he died shortly thereafter of his wounds," the source said, referring to a district in northern Lebanon where several wounded refugees have received medical care.

Syrian troops on October 27 laced the northern Lebanese border with landmines in a bid to stop arms smuggling and prevent refugees and army defectors from fleeing President Bashar Assad's brutal crackdown on anti-regime protesters, according to Lebanese officials.

Lebanon's eastern border with Syria has also since been planted with mines.

Friday's victim, who hailed from the Syrian border town of Heet, was making his way through an unofficial crossing into the northern Lebanese village of Kneissi in the Wadi Khaled district on his truck when the mine exploded, the medical source said, requesting anonymity.

He said two Lebanese villagers in Kneissi apparently heard the explosion and found the man lying on the dirt path that serves as an illegal crossing frequented by smugglers and, more recently, refugees fleeing the violence back home.

Syrian troops have regularly staged incursions into neighboring Lebanon in recent weeks, killing at least three people when they opened fire on border villages, according to local officials.

Lebanon and Syria share a 330-kilometer (205-mile) border but have yet to agree on official demarcation.

The United Nations on Friday reported more than 4,500 Syrians have fled to Lebanon since the anti-Assad revolt erupted in March, with hundreds crossing the border in the last two weeks.

sorry, but why a farmer should cross a border with another country? Farmers know PERFECTLY whose land they are standing on. What are all these Lebanese farmers and sheperds doing on the non demarcated border? Is naharnet suggesting (without showing any evidence) that the Syrians have laid landmines on Lebanese soil? Or maybe these innocent farmers are involved in illegal crossborder activities?