Hariri 'Summoned' to KSA, Riyadh Wants Him to 'Distance Himself from Aoun' 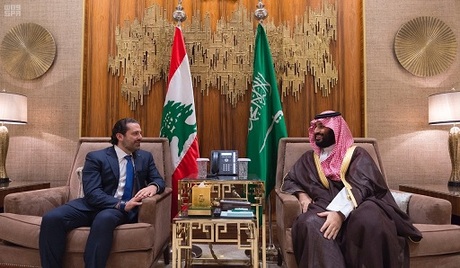 Prime Minister Saad Hariri's previously unannounced visit to Riyadh on Monday was not a normal visit and the premier was “summoned” to Saudi Arabia to be pressed on Hizbullah and on his ties with President Michel Aoun and the Free Patriotic Movement, a media report published Tuesday said.

“He will certainly face Saudi pressure asking him to lead a confrontation inside the government. It is not known if he can dodge it or if he can convince the (Saudi) officials of the need to preserve the (political) settlement” in Lebanon that led to the election of President Michel Aoun, the sources told al-Akhbar.

The sources noted that the latest flurry of tweets by Saudi State Minister for Gulf Affairs Thamer al-Sabhan were “repeated warnings to Hariri to distance himself not only from Hizbullah but also from President Michel Aoun and the FPM.”

Saudi Arabia wants the premier to “draw a line in his relation with the FPM in order to preserve balance inside the executive authority, seeing as there is no clear or firm stance from Hariri on the FPM's policies and its stances on Hizbullah and (Lebanon's) foreign policy,” the sources added.

And as the Mustaqbal sources expressed concern over the visit and its possible repercussions on the domestic situation, they ruled out that Hariri will be asked to “take practical steps, such as resigning from the government.”

After his arrival in Riyadh on Monday, Hariri held talks with the kingdom's powerful Crown Prince Mohammed bin Salman. Talks between the two leaders tackled "bilateral relations between the two countries and the regional developments," the Saudi news agency said.

Al-Sabhan had on Monday called for “toppling Hizbullah” and promised “astonishing” developments in “the coming days.”

Al-Sabhan had on Sunday voiced surprise over what he called the “silence of the government and people” of Lebanon over Hizbullah’s actions.

al-Akhbar newspaper is as credible as @mowateh when he says he is secular shia and has only one account.

yes his visit to KSA was scheduled for at least 2 weeks, but the hezbollah mouthpiece chooses to claim he was 'summoned'!.

Who, other than gigahabib the Internet troll, actually believe that fantasy?

typical shia with inferiority complex and a chip on his shoulder.

My boyfriend The Lewaaten.. umm.. lewatic ..urr.. mowatic.. oops... I mean The Mystic told me that Iran invented the wheel. He convinced me when he showed me the proof, a factory in Tehran making unicycles.