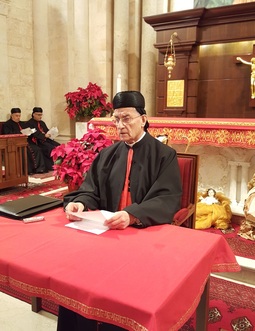 Maronite Patriarch Beshara al-Rahi stressed in his Christmas message on Saturday the need to value the freedom of the press, after several encounters in Lebanon that saw lawsuits against journalists, as he asked the State to shoulder responsibility for private school teachers' salary increase demands.

“The Lebanese fear an authoritarian slide towards patterns aiming to restrict the freedom of the press for political or malicious purposes. The judiciary should never be politicized,” said the Patriarch.

The Maronite's remarks came after Thursday's demonstration where a number of civil society groups rallied outside the Justice Palace in Beirut in support of press freedom and to reject “the muzzling of voices.”

The demonstration came in the wake of the prosecution of Marcel Ghanem, one of Lebanon's most prominent talk show hosts, over an episode in which he hosted Saudi journalists who labeled the Lebanese president and parliament speaker as “terrorists.”

Turning to the private school teachers' demands for an increase in salary, Rahi said: “Private schools, mainly Catholic ones, should be concerned with preserving the rights of teachers and relieving the burden of the students' parents. The State must pay the difference resulting from the wage scale approval.”

Several private schools have refused to alter the teachers' salaries arguing that any increase will entail a hike in tuition fees which was in turn strongly rejected by parents' committees.

President Michel Aoun has reportedly said that the State could pay the salary increase demanded by the teachers.

I think they need to value the freedom of their souls and not sell out to foreigners. Merry Christmas.