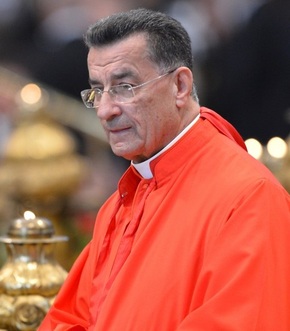 Maronite Patriarch Beshara al-Rahi on Monday warned against “the elimination of any component” while stressing that Lebanon should not restrict public freedoms.

“Lebanon cannot bear the monopolization of power and posts, the elimination of any of its components, or the restriction of the public freedoms that are enshrined in the Constitution, topped by the freedoms of opinion and belief and consequently the freedoms of press, publishing and expression,” al-Rahi said in his Christmas Day sermon in Bkirki.

“These freedoms must be regulated according to their laws and codes of ethics, seeing as diversity and freedom are twins that represent the joy of the Lebanese,” the patriarch added.

His remarks come amid concerns that there are attempts to “isolate” certain political parties, such as the Lebanese Forces and the Kataeb Party. They also come amid an outcry over the judiciary’s summoning of prominent talk show host Marcel Ghanem.

He is presumably hinting that Article 24 of the Constitution, which reserves half of Parliament to Christians, who number about a quarter of the population (though no census has been done since 1932), is the heart of Lebanon. Lebanon has heart disease, then.