Aoun to Army Command Delegation: No One's Rights Will be Usurped 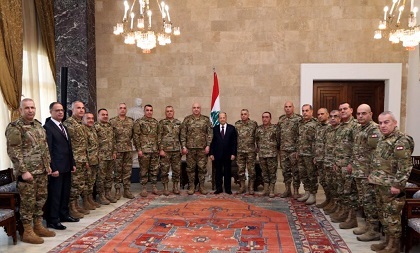 President Michel Aoun on Thursday reassured an Army Command delegation that “no one's rights will be usurped,” in connection with a growing row with Speaker Nabih Berri over a decree granting one-year seniority to a number of officers.

“You remained loyal to your oath and you did not have any shortcomings in any mission... Forget about the political statements you are hearing,” Aoun told the delegation during a meeting at the Baabda Palace.

“We will continue to do justice to the eligible beneficiaries and our decision to grant promotions was aimed at compensating then over a flaw that happened in the past,” the president added.

And pledging that “there will be no violations and no one's rights will be usurped,” Aoun pointed out that “the current debate is not related to the rights of the armed forces but rather to a political conflict over other issues.”

Well, like him or not, but unlike most people on high level politically or militarily in Lebanon Michel Aoun is 100% self-made man from a very modest background. He has achived far more in his lifetime than all of us keyboard-warriors here on Naharnet combined.

Aoun did not come back under syrian patronage. He came back when the syrians had left Lebanon after their miscalculation regarding assasinating Rafik Hariri. After Aoun came back two of the very first things he did was to visit the grave of Rafik Hariri and to visit Geagea who was still in prison. What happened after that is oper for interpretation. In my view Saad Hariri did a huge mistake by underestimating Aouns stature among the christians, and went for an alliance with Geagea. Aoun was left in the cold and was pushed towards Hezbollah. Its true that Aoun has never been much of a diplomat, and the same kind of language he used about Hezbollah in the US Congress before was now used against his new opponents.

I have my reservations about things that he has said and done, but real-politik means that: 1. The MOU with Hezbollah had the ultimate goal of integrating Hezbollahs armed elements into the lebanese army. Nearly all of us wish that Hezbollah would just vanish in thin air just like that, but they wont. 2. Syrian soldiers is out of Lebanon since 2006, and continuing a war against the regime in Damascus would be lain stupid (not even more powerful neighbours like Jordan, Turkey, Israel does that) 3.The main concern now for any president would be the repatriation of the syrian refugees which is a economic burden on Lebanon as well as a potential permanent security threat like the palestinians became. Stability in Syria is benefitial for Lebanon, even if it means the dentist in charge.

and at what cost to Lebanon did his achievements come? Holding the country hostage for more than 2 years, shifting his alliances to suit his objectives and finally handing over the country to hezbollah are not in anyone's book considered an achievement. He is the king of demagogy using slogans such as naturalization of palestinians at every corner when in fact/reality the palestinians are not more than 170k in Lebanon. There are a lot more shia iraqis/bahrainis/yemenis in Lebanon than palestinians.