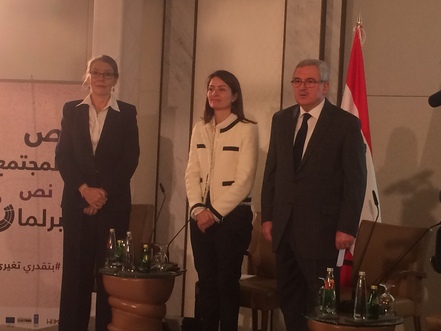 EU Ambassador to Lebanon Christina Lassen on Wednesday opened the conference “Fostering the role of political parties to promote women representation in the upcoming parliamentary elections 2018".

Addressing the audience, Lassen said women in Lebanon “need to feel that they are inspired.”

“They need to feel empowered and know that they have a very important role to play in shaping Lebanon's economic, social and political life," Lassen added.

In her opening remarks, the ambassador said: "Equality between men and women is part of the core values of the EU. It is a top priority for us, both in our internal policies and in our relations with our partners. We believe that not only is the equal participation of women and men a fundamental and essential right, but also that gender equality contributes to more inclusive, balanced and representative societies."

"I encourage all political parties to recruit women party candidates and to place them high on their ballot lists," she added.

In their opening remarks, Minister of State for Women's Affairs Jean Oghassabian, Minister of Interior and Municipalities Nouhad al-Mashnouq and Acting U.N. Special Coordinator for Lebanon Pernille Kardel also shared views, ideas and suggestions on possible ways to increase the representation of Lebanese women as candidates in parliamentary elections in the absence of a quota for women in the new electoral law, and to strengthen the fairness and inclusiveness of the 2018 parliamentary elections.

The percentage of women's representation in the Lebanese Parliament being historically low (the current Parliament includes 4 women out of the 128 MPs), the conference addressed the need to discuss gender and elections. It emphasized the importance for political parties to include women candidates on their lists.

The conference presented a roadmap that puts forward alternatives to the quota to increase women’s participation in politics and help advocating and influencing to support the inclusion of women in public life, such as encouraging political parties to nominate women in the upcoming elections, including by implementing a voluntary quota.