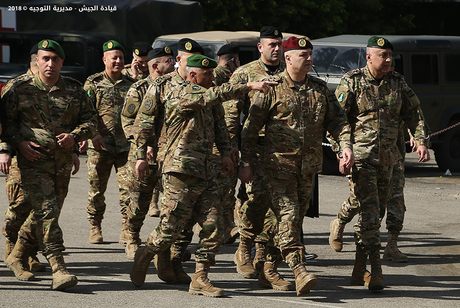 Army Commander General Joseph Aoun announced Thursday that the army “maintains its readiness on the southern border to confront any Israeli military aggression or any attempt to encroach on parts of the territorial and maritime borders.”

“The army has the will to defend Lebanese rights through all the available assets and means, no matter how much the enemy’s threats and provocations may escalate,” Aoun said.

Last month Lebanon signed its first contract to drill for oil and gas in a pair of offshore zones, including one that Israel says belongs to it.

Tensions between Lebanon and Israel have also mounted as Israel pursues the construction of a wall along the border.

Lebanon says part of the wall follows the U.N.-demarcated "Blue Line" drawn up after Israel's withdrawal from southern Lebanon in 2000, and insists some sections will cut into its territory.

Israel has dismissed the claim and said the work is being carried out on Israeli territory.

Israel began building the wall in 2012, six years after fighting a devastating war with Lebanon’s Hizbullah.

I had the same reaction as you. Un LOL géant.

Btw, The Monroe Hotel is owned by the Lebanese Army:) They have money to own hotels but not to buy arms.

But atleast we will be able to drag as many of you zionist yahoudis with us to death as possible.

mystic ya iraní
why don't you die now instead of then.
Next war ya heretic 90% of lebanon will be applauding every single smart bomb that will be falling on your heads.

Where would this clown be 5 minutes after he confronts an Israeli border encroachment? in a bunker most probably.

General Aoun who is now not president earned my utmost respect and captured my wildest imagination for saying Army Ready to Confront Any Israeli Border Encroachment Attempt!

And your definition of peace in the Middle East is?

So if there is no Israeli attempt against Lebanon you leave them peaceful and you go along with them existing ?

yes of course and that's why the irani nassrallah has been in hiding for the last 20 years.

This is for you @theresitance4.0/aldente;)

He was unable to confront a few shia thugs a couple of weeks ago when they wreaked havoc on the capital or protect the citizens on May 7th and he wants us to believe he will confront the Israelis?:)

you're nothing more than a local police force that can hardly contain a demonstration.

In your scenario, everybody wins! Just like a video game.

Many years ago there was a saying in Israel stating that they didn't know which would be the first Arab State to make peace with Israel, but Lebanon will be the second.
Unfortunately for Lebanon this didn't come about.