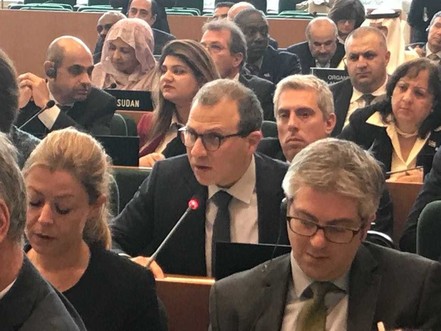 “This would alleviate its financial burden and would contribute to lowering the numbers of Palestinian refugees in Lebanon without harming the right to return (to Palestinian territories occupied in 1948 and 1967), which is sacred,” Bassil told a Rome summit aimed at discussing UNRWA's future.

The UN agency faces an unprecedented crisis after the U.S. froze tens of millions of dollars in funding.

“We call on the international community to organize a campaign for the voluntary return of Palestinian refugees, seeing as all the prerequisites of a safe and dignified return are available,” Bassil added.

Lebanese authorities had in December announced that more than 174,000 Palestinian refugees live in Lebanon, in the first-ever census of its kind for a country where demographics have long been a sensitive subject.

The census was carried out by the government's Lebanese-Palestinian Dialogue Committee in 12 Palestinian camps as well as 156 informal "gatherings" across the country.

But their presence has long been a controversial in Lebanon, with many blaming it for the eruption of the bitter war that ravaged the country between 1975 and 1990.

Lebanon has not carried out a census of its own citizens since 1932, making the 2017 count even more remarkable.

It sheds light on the living conditions of 174,422 Palestinian refugees, as well as another 18,601 Palestinians who fled the neighboring conflict in Syria to camps in Lebanon.

Announcing the results, Prime Minister Saad Hariri said Lebanon had a "duty" towards Palestinians but insisted that Lebanon would, under no circumstances, accept their naturalization.

Palestinian officials have also consistently rejected permanent resettlement in Lebanon because of their longstanding demand that those who fled or were forced out of their homes with the creation of Israel be granted the right of return.

The census result is much lower than the 469,331 people registered in Lebanon with the U.N.'s Palestinian refugee agency.

"UNRWA does not have a headcount of Palestinian refugees who are currently residing in Lebanon. What we have as an agency are official registration records for the number of registered Palestine refugees in Lebanon," spokeswoman Huda Samra told AFP at the time.

"If someone registered with UNRWA in Lebanon decided to live outside Lebanon, they don't notify us," she said.