Report: Nasrallah to Push Voting 'In Person' in Baalbek-Hermel 'if Needed' 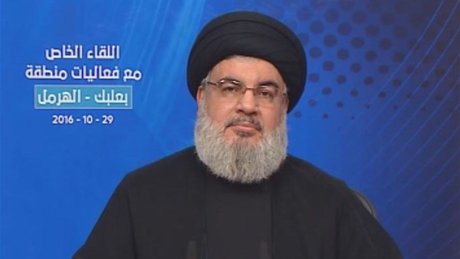 ‎Hizbullah leader Sayyed Hassan Nasrallah reiterated that he will “personally” motivate people on election day into casting their ballots in Hizbullah's stronghold of Baalbek-Hermel district shall he sees a low turnout, An Nahar daily reported on Tuesday.

“Shall I see a low turnout on election day, I will personally go to the villages and towns in Baalbek and Hermel in order to support the lists of Hope and Loyalty,” the daily quoted Nasrallah as saying at a “special” meeting.

“I am not joking, and my words are not out of encouragement,” he said.

Nasrallah said the party is looking forward for the upcoming elections, “we have done everything we can for our allies,” he said.

Refusing to reply to “campaigns and provocations”, he said: “You will only hear insults against us from al-Mustaqbal Movement and other parties because they only want to please Saudi Arabia, the United States and other states. They have nothing to tell their audience.”

Nasrallah usually makes his speeches in televised addresses, and has rarely been seen in person since Hizbullah battled Israel in a month-long war in 2006.

“You will only hear insults against us from al-Mustaqbal Movement and other parties because they only want to please Saudi Arabia, the United States and other states. They have nothing to tell their audience.”

and what do you have to tell your audience: how you grew the economy, created jobs, encouraged investments, reduced public debt, or increased captagon production, caused more refugees to enter Lebanon?

If this isnt voter intimidation then I don`t know what is.

His party is already paying huge sums of money in Baalbek and Hermel. He is also using the amnesty law as a carrot. He will lose at least 2 MPs in that area so he is in panic mode.

A terrorist running for elections

I respect Mr. Nassrallah for pushing voting in person.

That's a good opportunity to take him out! Just saying...

Voting for a filthy murdering militia, what a joke !