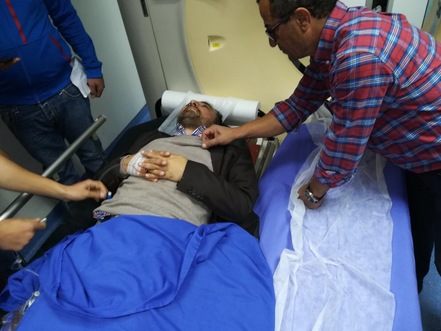 Anti-Hizbullah journalist and parliamentary candidate Ali al-Amin was physically assaulted Sunday in his southern hometown Shaqra at the hands of Hizbullah supporters.

“I'm besieged in the town of Shaqra. I have been attacked by more than 30 young men who belong to Hizbullah. My tooth is broken from the beating and I suffered punches and kicks to my body. They used all types of physical assault against me,” al-Amin said in a video posted online, describing the assailants as a “group of thugs.”

He called on President Michel Aoun and the Supervisory Commission for Elections to address the incident.

“I was assaulted as I was hanging one of my pictures,” al-Amin explained.

MTV said he was taken to the Tebnin Hospital for treatment after suffering bruises and fractures in the back.

Al-Amin's electoral list, 'Shbaana Haki' (Enough With Talking), which is comprised of independent Shiite figures and a Lebanese Forces candidate, slammed the incident as a “blatant and demeaning attack.”

“This reflects the confusion of the de facto forces and their rejection of any change in their regions,” the alliance said.

Where were the military forces or the ISF? Nowhere to help the honorable candidate. What will happen to the culprits? Nothing, because this has been ongoing since late 2004.

Sorry to say I'm not surprised at all. Sayyed Ali al-Amin and his family have been targets of Hezballah's Neanderthals for years. One day the funding will dry up and Hezballah will die off. But the al-Amin clan will still be shining beacons of learning and free thinking working to show the Neanderthals the way out of ignorance.

They (the FPM) are despicable creatures.

Nasrallah's unending TV presence like bad infomercials, the attacks on Al-Amine and Al-Jawhari and the repeated destruction of opposing billboards shows a nervousness never seen before in the Shiite duo camp. That's strange with all polls seeming to point to easy wins for them with minimal loses almost everywhere. I wonder if the nervelessness stems from their internal poling showing otherwise.

That is the same thing, if a Sunni man in Tripoli smeared King Salman, or a Druze man in Aley smeared Jumblat or a Christian in Zahle insulted Geagea.

Ofcourse supporters will be mad if someone like that roams around, as would any other party in Lebanon.

This saudi paid man even got off lucky.

Not unusual for a shia thug like you to find this kind of behavior rather acceptable.

the only people who are paid to sell there sole and country are creatures like yourself.