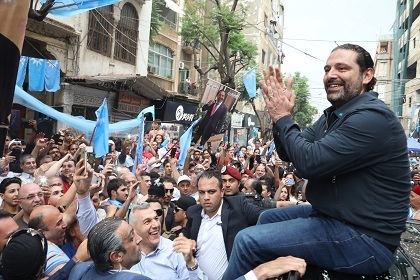 Hariri was received at Dar al-Fatwa by Grand Mufti Sheikh Abdul Latif Daryan, who was meeting with a group of scholars and clerics.

Daryan welcomed Hariri and said: "By coming here today, you reminded me of the great martyr of Lebanon, PM Rafik Hariri, who used to come to Dar al-Fatwa in the essential periods of the history of Lebanon.”

“The good relationship between Dar al-Fatwa and the Premiership must remain strong and solid, because in the end the Mufti of the Republic and the Prime Minister protect the sect and the nation,” the Mufti added.

“We are the ones who preserve coexistence, security and stability. You and us have carried the banner of moderation. Yes we are moderates, we are not terrorists,” Daryan added.

“I tell you: do not be afraid and do not worry, I am with you and the scholars of Lebanon are with you... We hope that there will be a large participation in the elections,” the Mufti went on to say.

Hariri for his part described his visit to Dar al-Fatwa as “one of the most important visits.”

“Dar al-Fatwa is the shield of all Muslims in this country, and whenever it is fine, Muslims in Lebanon are fine. Our decision is free and for the sake of moderation and the country. This is what we fight for and we will always be with Dar al-Fatwa," the premier added.

He stated: "All I care about is the country, and when extremism was high in Lebanon, I was doing the opposite because I believe that Islam is the religion of moderation, peace and love. Moderation is not weakness, but rather strength, and moderation is what brings security, stability, economy, employment, happiness and love among people.”

Referring to the regional situation, Hariri said: “The area around us is burning, but that does not mean that we are going to burn. We have to put out the fire.”

Hariri later made several stops in the Beirut neighborhoods of Aisha Bakkar, Zaroub al-Alia, Tallet al-Khayyat, Malla and Tariq al-Jedideh, where he was greeted by huge crowds of supporters.

Earlier, Hariri attended a lunch banquet held by Saad El Din Hamidi Sakr on the Beirut Arab University street, in the presence of a crowd of Beiruti figures.

After a welcoming speech from Sakr, Hariri said: “The elections that will take place next Sunday are crucial for the country, Beirut, its decision and identity, because the vote will determine the shape of parliament for the next four years.”

“If we do not have a large bloc, especially from Beirut in the midst of the upcoming changes and challenges, we will not have an impact and Beirut's decision will go to other known parties,” Hariri warned.

“We have a comprehensive and clear program and project for economy, security, openness and dialogue. We are fighting this battle with you to complete this project. Therefore everyone has to vote to prevent anyone from blocking this project,” the premier added.

The leader being paraded in the slums of his impoverished voters.... and they are happy while he gets richer and fatter. Oh I forgot... he is the son of Rafik Hariri which makes him a super human and better than anybody else.