Hariri Says No Fear over Security after Elections 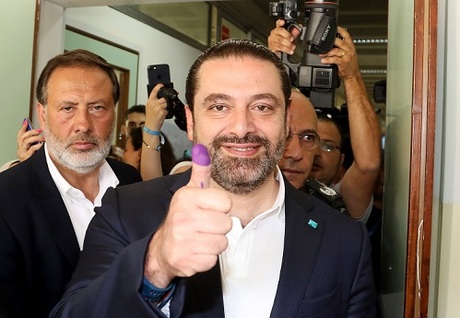 Prime Minister Saad Hariri voted Sunday at the Shakib Arslan School in Verdun, Beirut, and reassured that he does not fear a security deterioration after the parliamentary elections.

While waiting for his turn, Hariri said in response to a question: “Order is nice.”

He added that he is committed to the principle of electoral silence.

Hariri however responded to questions from reporters after leaving the polling station.

“I performed my electoral duty and cast my vote like any Lebanese. I think that if we look at what is happening around us and how Lebanon is holding democratic elections, we see that the country is fine,” he said.

“Every Lebanese citizen must vote to perform their national duty and vote for whomever they want. I would like to thank all those responsible for the electoral process, from the Ministries of Interior and Foreign Affairs to the Internal Security Forces, the Lebanese Army, the delegates, the observers, the judges and all institutions,” the premier and the leader of al-Mustaqbal Movement added.

Asked how the rival parties will hold national dialogue or form a national unity cabinet after they “traded treason accusations,” Hariri said: “We are in a democratic country and everyone has the right to say what they want and hopefully the electoral process will happen smoothly.”

Told that the Grand Mufti has openly declared his support for him in a possible “violation of political neutrality of this religious institution,” the premier said: “Every human being is free to say what he wants. Today I am here to vote like everyone else. I do not want to talk about these matters. I urge all Lebanese in Beirut and all regions to vote.”

Asked if he promises a new electoral law that “truly represents all Lebanese” after the elections, Hariri said: “I think that this government exerted a great effort, and today we have elections after nine years of absence. This in itself is useful, and the Lebanese citizens will be represented hopefully.”

In response to another question, Hariri reassured that “there is no fear” over the country's security after the elections.

According to his office, Hariri was “keen to shake hands with a number of people with special needs and elderly people who came to cast their ballots.”

“Upon his departure, citizens gathered in front of the polling station to greet him and take pictures,” the office added.