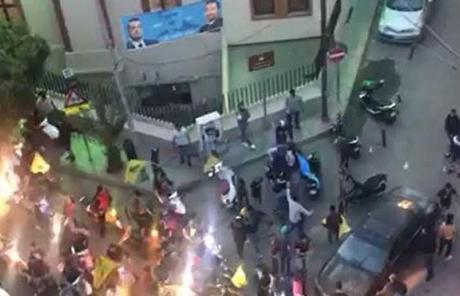 The army deployed Monday evening across the capital Beirut, after the Aisha Bakkar area and other neighborhoods witnessed post-elections security incidents.

A video circulated on social media showed a fistfight that involved the use of batons near the Aisha Bakkar Mosque. The clash erupts after dozens of young men arrive in the area on motorbikes, carrying Hizbullah flags. The video shows them clashing with young men carrying al-Mustaqbal Movement flags.

A statement issued by Prime Minister Saad Hariri's office said the premier called Army chief General Joseph Aoun and Internal Security Forces chief Maj. Gen. Imad Othman to ask them to “contain the chaos in Beirut and take the necessary measures as soon as possible before things spiral out of control.”

Speaker Nabih Berri later issued a statement condemning what he called “the shameful practices that were carried out by some convoys that roamed the capital Beirut's streets and targeted symbols, headquarters and leaders whom we highly respect.”

“We condemn in the strongest terms all the appalling practices on some streets in the capital Beirut during which some hooligans harmed the AMAL Movement and Hizbullah and their achievements. These irresponsible practices do not reflect the behavior and ethics of the sons of Imam (Moussa) al-Sadr and Hizbullah,” the Speaker went on to say.

He also called on security and judicial authorities to take the legal measures against anyone involved in such practices.

The army deployed across the capital, made arrests and erected checkpoints in the wake of the incidents and the appeals of Hariri and Berri.

So, the competent Interior Minister who just won the people's confidence and vote issued an edict banning the use of motorcycles for 3 days thus destroying the livelihoods of hundreds if not thousands of people who depend on motorcycles as a means of transport for their living.

That is how you handle sectarian security situations. It's like if a car bomb explodes, you ban the use of cars to solve the problem.

So tomorrow they will use cars to terrorize neighborhoods, and the genius will ban cars!

Nassrallah warned that those who continue the “sectarian rhetoric” after the elections would be “seeking strife” and “blocking any improvement in the country.”

and what happened next? He sent his thugs on a despicable display of sectarian hatred that only the shia of Lebanon are capable of.

>The killer always goes bak to the scene of the crime.<

and Berri will be automatically re-elected as Speaker.

ashraf nass of nassrallah doing what they do best: hatred, sectarianism, terrorism, destruction and of course coexistence.

the scum of the earth