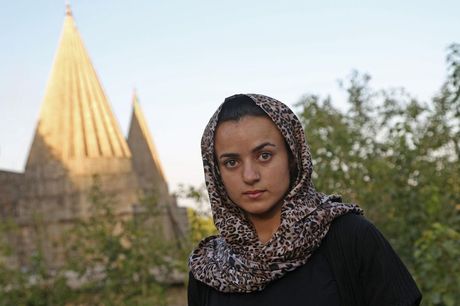 A young Yazidi woman who fled to Germany but returned home to northern Iraq says she cannot escape her Islamic State group captor who held her as a sex slave for three months.

Ashwaq Haji, 19, says she ran into the man in a German supermarket in February. Traumatized by the encounter, she returned to Iraq the following month.

Like many other Yazidis, she was kidnapped by IS when the jihadists seized swathes of Iraq in the summer of 2014.

In their ancestral region of Sinjar in northwestern Iraq, thousands of Yazidi women were killed or sold off as sex slaves.

The teenager was held from August 3 until October 22 of 2014, when she managed to escape from the home of an Iraqi jihadist using the name Abu Humam who had bought her for $100, she told AFP in the Yazidi shrine of Lalish, north of second city Mosul.

The Yazidis are a Kurdish-speaking religious minority that was brutally persecuted by the jihadists who despise them as heretics.

Under a German government program for Iraqi refugees, Ashwaq, her mother and a younger brother were resettled in 2015 in Schwaebisch Gmuend, a town near Stuttgart.

Her refuge in Germany, where she took language lessons, was cut short on February 21 when a man called out her name in a supermarket and started talking to her in German.

"He told me he was Abu Humam. I told him I didn't know him, and then he started talking to me in Arabic," she said.

"He told me: 'Don't lie, I know very well that you're Ashwaq'," she said, adding that he gave her home address and other details of her life in Germany.

After that experience, she immediately phoned the local police, who told her to contact a specialized department.

- Living in fear back in Iraq -

The judicial police in the Baden-Wuerttemberg region of southwestern Germany said an inquiry was opened on March 13 but that Ashwaq was not present to answer questions.

A spokesman for the German federal prosecutor's office told AFP that so far the man's identity could not be confirmed "with certainty."

Germany says it has opened several investigations over terrorism charges or crimes against humanity involving asylum seekers linked to jihadist groups in Iraq, Syria or Afghanistan.

Ashwaq said she had viewed surveillance videos filmed in the supermarket together with German police and was ready to keep them informed of her whereabouts.

But she said that she was not willing to return to Germany for fear of seeing her captor again.

She is back in northern Iraq with her mother and brother, but living in fear because she says Abu Humam has family in Baghdad.

She wears black in a sign of mourning for five brothers and a sister still missing since their own capture by IS.

At a camp for the displaced in nearby Iraqi Kurdistan where he has been resettled, her father, Haji Hamid, 53, admits returning was not an easy decision, even though the government proclaimed victory over IS at the end of last year.

"When her mother told me that she'd seen that jihadist... I told them to come back because Germany was obviously no longer a safe place for them," he told AFP.

Life in Iraq is also not easy for Ashwaq or for the 3,315 other Yazidis who escaped from the jihadists. A similar number are still being held or have gone missing, according to official figures.

"All the survivors have volcanoes inside them, ready to explode," warned Sara Samouqi, a psychologist who works with several Yazidis.

"Ashwaq and her family are going through terrible times."