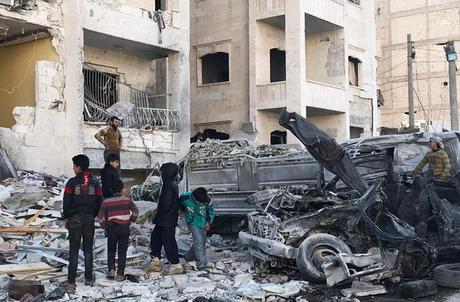 Disagreement between Turkey and Russia over how to tackle the Syrian rebel stronghold of Idlib seems to have deferred a looming regime offensive on the province, analysts say.

Russia and Turkey are on opposite sides of the conflict, but key global allies.

But discord at the summit between Erdogan and Putin, in a rare scene captured on camera, may have prompted Russia to postpone the Idlib strike so as not to provoke Ankara, which is fiercely opposed to a military option.

"I believe an offensive, if there will be one, will not come before several weeks," a senior Turkish official told AFP, speaking on condition of anonymity.

Turkey, which backs rebels fighting against President Bashar al-Assad's regime, co-sponsors -- with regime allies Russia and Iran -- the so-called Astana talks launched in January 2017 in the quest for a lasting ceasefire.

To date, the dialogue has resulted in the creation of four pre-ceasefire "de-escalation zones" in Syria, including in Idlib.

Idlib is the last major opposition stronghold in the war-torn country. Sixty percent of the area is controlled by the Hayat Tahrir al-Sham (HTS) jihadist group, an al-Qaeda branch operating in Syria.

Intense negotiations have taken place between Turkey and Russia since the failure of the Tehran summit, to hammer out a compromise in a bid to avert an assault which Erdogan has cautioned would ignite a "bloodbath".

Such a compromise could include neutralising the HTS -- officially designated as a terror group by Ankara. Erdogan and Putin are expected to discuss the issue when they meet in the Russian resort city of Sochi on Monday.

- Compromise formula -For Turkey, the stakes are high.

Ankara fears a large-scale assault on Idlib, which lies on its southern border, could trigger a massive flow of refugees onto its soil. Turkey is already home to more than three million Syrians who have fled the conflict.

Abdul Wahab Assi, an analyst at the Syria-based Jusoor Studies Centre, said disagreements at the Tehran summit "rule out a possible offensive in the short run, at least until the end of the year."

He said a possible compromise from the ongoing talks could take the form of a "limited military operation or surgical strikes" targeting the HTS, or modifying the borders of the de-escalation zones to keep armed rebels from certain sectors.

Russia may be open to such a plan, Assi said, as long as it would secure the Idlib section of the Aleppo-Damascus highway and put an end to drone attacks launched from Idlib against Moscow's main military base of Hmeimim in the neighbouring province of Latakia.

Some three million people live in Idlib province and adjacent areas, the United Nations says, around half of whom have already fled their homes in other parts of Syria.

Regime forces and Russian warplanes resumed airstrikes on Idlib in September but the strikes fell in intensity this week.

- Turkish 'defensive' reinforcements -Turkish media reported Ankara has sent reinforcements, including tanks, to beef up its border with Syria and its observation posts in Idlib.

Turkish military analyst Metin Gurcan, judges these measures to be of a "defensive" nature, aimed at protecting Turkish observation posts against any possible threat.

Gurcan said the lack of an agreement with Ankara could push Moscow, and thus the Syrian regime, to stage an "incremental operation that will last months" rather than a full-fledged attack.

"Russia is trying to keep Ankara in the game," he told AFP, saying any confrontation between the two countries was "highly unlikely."

This is rich, Russia and Turkey are deciding on the fate of Idlid.. seriously, what function has Bashar in syrian now, is he like a janitor or something? or maybe the dude that works for the janitor..
Bahsar: I will mop the stairs now
Bashar's Boss: OK.. no wait the CEOs are deciding if they want to take the stairs or the elevator.. I'll call when you can mop.. in the meantime go wash the windows..