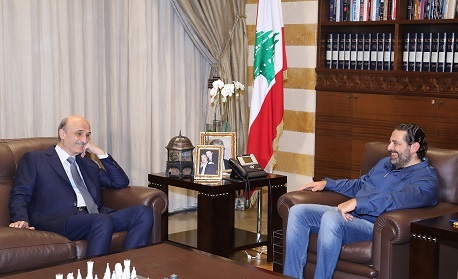 The meeting that was held Saturday between Prime Minister-designate Saad Hariri and Lebanese Forces leader Samir Geagea failed to achieve any breakthrough in the cabinet formation crisis, a media report published Sunday said.

“The two-hour meeting represented a key milestone on the course of direct consultation between Hariri and Geagea regarding the available alternatives that could resolve the obstacle of ensuring balanced representation for the LF,” An Nahar newspaper reported.

“The meeting did not yield anything to dispel the atmosphere of uncertainty that has engulfed the past hours as a result of the failure to allocate a significant portfolio to the LF, after the President openly told the PM-designate that he will not give up the justice portfolio which had been promised to Geagea by Hariri,” the daily added.

Moreover, An Nahar noted that the latest stances by Hizbullah and the Marada Movement indicate that a new obstacle regarding Sunni representation has arisen.

“The insistence on appointing a minister from March 8's Sunnis and the nomination of MP Faisal Karami for a ministerial portfolio that would be part of the President's share do not indicate that the obstacle is only about the LF but that there is an inclination to delay the formation of the government,” the newspaper added.

“By Saturday evening, no indications were looming on the horizon to suggest that the LF and Sunni obstacles had been resolved, as evidenced by the fact that the PM-designate has not requested an appointment with the President and has not met with Speaker Nabih Berri after the latter's return from Geneva to brief him on the formation process developments,” An Nahar said.