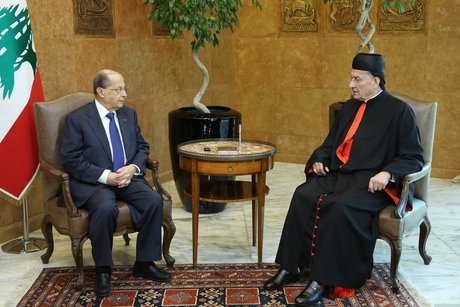 Maronite Patriarch Beshara al-Rahi confirmed Monday that a much-anticipated reconciliation meeting between Lebanese Forces leader Samir Geagea and Marada Movement chief Suleiman Franjieh will be held “soon,” as he stressed the need to facilitate the formation of the new government.

Speaking after talks with President Michel Aoun at the Baabda Palace, al-Rahi called for “supporting the efforts of the president and the prime minister-designate in order to form the government,” while emphasizing “the need to achieve national unity.”

“President Aoun will not accept the formation of the government to remain faltering,” the patriarch added.

Noting that “strength is not about putting sticks in the wheels but rather about facilitating the formation of the government,” al-Rahi expressed “solidarity” with President Aoun.

“We hope everyone will support his stance and the solutions will not be at the expense of Lebanon, internal unity or domestic balance as the president calls it,” the patriarch went on to say.

Responding to a reporter’s question, al-Rahi said: “The date of the meeting between ex-minister Suleiman Franjieh and the leader of the LF party has not yet been decided but it might be held soon.”

I have the utmost respect for both general aoun who is now president and imam and his FPM spiritual presidential advisor.