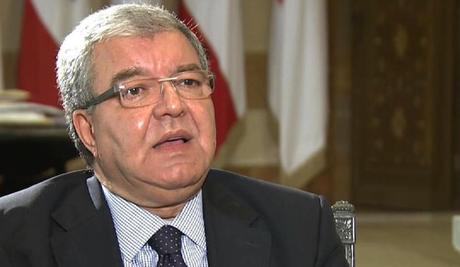 Caretaker Interior Minister Nouhad al-Mashnouq assured on Thursday that Prime Minister-designate Saad Hariri will not withdraw from forming the country’s government, noting that Sunni MPs have made the wrong approach.

On Hariri’s presence in Paris amid rumors he is on a retreat in the French capital, Mashnouq brushed off the claims.

“It is a matter of days and Hariri will return back to Beirut to hold contacts with the various political parties in a bid to find a solution. Calm rhetoric is crucial in order to form the government, which will be formed according to the national standards,” said Mashnouq.

His remarks came after meeting Grand Mufti of the republic Abdullatif Daryan in Dar el-Fatwa.

On demands of the so-called independent Sunni MPs of March 8 to be represented in the government, Mashnouq said they “made the wrong approach.”

“They used the wrong door and approached it through a political party not suitable to name any of them,” he said, in an indirect reference to Hizbullah.

The government was on the verge of formation on October 29 after the Lebanese Forces accepted the portfolios that were assigned to it but a last-minute hurdle over the representation of the aforementioned MPs surfaced.

Hizbullah insisted that the six Sunni MPs should be given a seat in the government, refraining from providing Prime Minister-designate Saad Hariri with the names of its own ministers in a bid to press him.

President Michel Aoun -- a Hizbullah ally and the FPM founder -- threw his support behind Hariri and rejected the demand during a TV interview, slamming the “use of delay as a political tactic” and insisting that the aforementioned MPs are “individuals and not a bloc.”