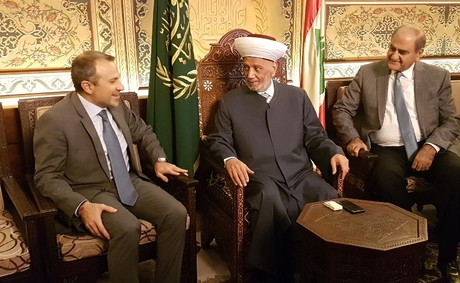 "We want a strong government and a strong Prime Minister, and what tampers with the PM also tampers with the tenure," Bassil said in remarks made following his meeting with Grand Mufti Sheikh Abdullatif Deryan in Dar-al-Fatwa.

"The issue is not related to the PM's powers; rather, there is a problem regarding representation," he added.

"The Mufti has a role to play in that respect. We are in a national crisis and need to hear the guidance of the Mufti," he stressed.

"It is time to talk behind closed doors to reach a solution," he proposed.

"I am upbeat that we are heading to a solution based on justice, correct representation and national agreement to solve the government formation hurdle," he said.

"We have principles regarding the solution so that it should not be a random one. If everybody is convinced about these principles, then we go to discuss the ideas," he added.

no need to talk to Deryan, Hariri proclaimed that he is the father of Sunnis in Lebanon.

Mr Bassil is on a tour promoting himself. Nuttin to do with Sunnas, Shee3as, their fathers or mothers.