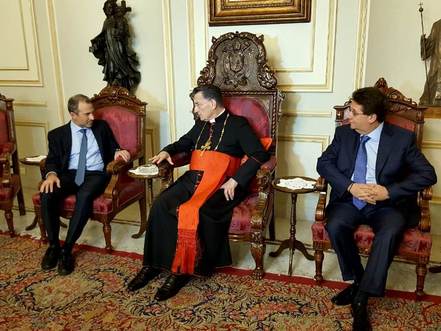 Free Patriotic Movement chief MP Jebran Bassil held talks Thursday in Bkirki with Maronite Patriarch Beshara al-Rahi after which he urged all parties to “cooperate to find solutions” to the cabinet formation deadlock.

“Any clash, regardless of its nature, harms all Lebanese,” Bassil said, explaining why he has launched a mediation effort aimed at resolving the so-called Sunni obstacle that is delaying the formation of the new government.

“Over the past days, we all coordinated with the government dispute parties and we pacified the atmosphere and now we must enter another phase which is turning general ideas into practical ones,” Bassil added.

“We call on all parties to cooperate to find solutions based on fair representation and on general principles that lead to a quick formation of this government,” the FPM chief went on to say.

He also emphasized that the parties cannot enter the new government according to a “victors and losers approach.”

Asked whether the new cabinet line-up will be announced soon, Bassil said: “Pray with us.”

Bassil is meanwhile trying to convince the rival parties to accept a settlement based on naming a “consensus” Sunni minister.

now you are willing to cooperate ya Bassoula, you are a bloody hypocrite