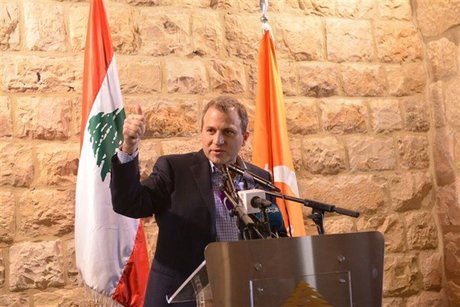 Free Patriotic Movement chief MP Jebran Bassil announced Tuesday that “had it not been for Hizbullah, General (Michel) Aoun would not have become president.”

“And Hizbullah must admit that had it not been for the FPM, it would not have managed to persevere in the face of Israel, terrorism or the isolation attempts,” Bassil added at a Mar Mikhail Church ceremony marking 13 years since the historic “memorandum of understanding” was signed between the two parties.

“This agreement was not aimed at isolating anyone. It rather paved the way for national agreements with everyone and there are articles related to sovereignty that have been fulfilled as others remain pending,” Bassil added.

“Partnership with Hizbullah protects national unity and the country and it is important. That's why we always return to it,” the FPM chief went on to say.

Turning to the thorny issue of Lebanon's relation with Damascus, Bassil said: “The FPM will never accept Syria's presence inside Lebanon but will stand by it, the same as it did over the past eight years, when it is behind the border.”

Bassil: Aoun President Thanks to Hizbullah

Syria is already sitting at your table

.... and every future Lebanese president will be saying that. As long as corrupt opportunists like the FPM/Bassil/Aoun exist who use hezbollah's illegal and sectarian weapons to achieve their personal objectives Lebanon will remain hostage to Iran and Syria.

Was Aoun elected only by hezbollah for Bassil to thank or was it hezbollah's obstruction tactics and illegal terror weapons that Bassil is thanking?

why? How many MPs does hezbollah have in Parliament? Last time I checked it was 11 MPs. So is Bassil saying the 11 hezbollah MPs made aoun president?

lol, aoun was elected with 83 votes but only 10-11 hezbollah votes that made him president according to bassil. What this corrupt lowlife is saying : "We thank the terrorist party for making aoun president by threatening, paralyzing, and obstructing the democratic practices involved in electing a president."