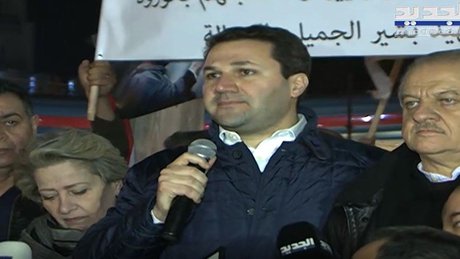 “They have insulted our most important icon – Bashir Gemayel,” the lawmaker said at Ashrafieh's Sassine Square, where Kataeb and LF supporters held a sit-in to denounce Moussawi's remarks.

“We are ready to take up arms to stand in your face, but we don't want to reach this situation. But do not try to corner us and do not attack our icons. Bashir Gemayel is a red line!” the MP went on to say.

During a speech by MP Sami Gemayel in parliament earlier in the day, Moussawi said “it honors the Lebanese that President Michel Aoun was elected through the rifle of the resistance while others reached the presidency on an Israeli tank.”

Nadim Gemayel hit back during the session, saying “no one reached the presidency on the top of an Israeli tank.”

“You were throwing rice on the Israelis and most of you voted for President Bashir in this parliament,” he added, apparently referring to some Shiite citizens and ex-MPs.

Moussawi snapped back, saying: “Your size is equivalent to an Israeli tank.”

This whole so called Country of Lebanon is a joke... I say it again a Banana republic run by warlords with a tribal mentality...

And Aoun keeps empowering the militia of Hezbollah instead of bringing them in to find a solution to their illegal arms.
What is the difference between Israeli loyal president and Syrian loyal president?
Both neighbors are jealous of Lebanon and want to control this 10452km2

Clearly there is, as we have known for years, a worldwide conspiracy to destroy the Christian powers of Lebanon and the Christians existence in this territory called Lebanon.

Nadim continue doing what you're doing.

Christians need to say it how it is and stop being fake. Jesus said 'let your yes be yes and your no be no whatever is more than these comes from evil'.

You cannot insult others and expwct them to say kind words. You insult Hezbollah symbols night and days. I read Nahar comments on a daily basis. Can you tell me how many times you insult Hassan Nasrallah and Hizballa (aka by your term kizballah). This is politics. Sami attacked the hizb and they hit back.
Yes, some shia thru rise and other rhru grenades..remember that. In all sects, you have different types of people. Some where just fed up with out the paleatinians treated them:)

Let me explain the Taef Accord to you, which replaced the National Pact. In the National Pact, Christian warlords promised to destroy Lebanon with French help if Christian privileges, like a guaranteed 6:5 majority of seats in the Chamber of Deputies, were threatened. The Taef Accord reduced the guaranteed share of Christian seats to half, and dropped the reliance on French assistance in destroying Lebanon if Christian privileges were threatened. France reportedly suggested Christian warlords convert to Buddhism, like enlightened French persons.